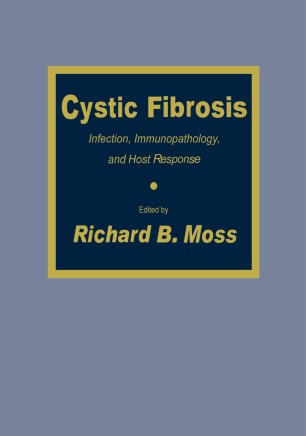 Part of the Allergy and Immunology book series (ALIM, volume 1)

This work is concerned with Cystic Fibrosis (CF), the most common fatal genetic disease in the Caucasian population. The decade of the 1980s was one of spectacular progress in understanding the genetic and molecu­ lar basis of CF. The research breakthroughs of the decade began with the first fundamental insights, published in 1981-1983, into the basic cellular pathophysiology of CF with demonstrations of altered ion transport in spe­ cialized exocrine epithelial tissues (1-3). Research progress shifted into a triumph of "reverse genetics," using restriction-fragment-Iength polymor­ phism DNA technology (4), with the localization of the CF gene to a region of chromosome 7 (5-7). Understanding, accelerated by an explOSion of in vitro methodologies for epithelial cell culture and transformation, allowed and physiological studies (8-11); these focused, controlled biochemical with increasing precision, on the molecular pathology of distal steps in the regulatory pathways for epithelial ion transport (12-19). Finally, the "end of the beginning" occurred in late 1989 with one of the great achievements of molecular genetics, the isolation and cloning of the CF gene (20). As a result, we now have a CF gene product, the cystic fibrosis transmembrane regulator (CFfR), possessing predicted amino acid sequence, suggested tertiary structure, and possible transmembrane transport function (21). These amazing developments have set the stage for the next round of advances, which surely will include: 1.