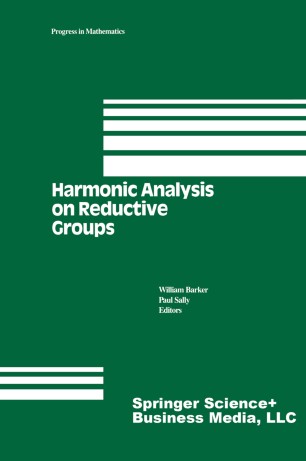 Part of the Progress in Mathematics book series (PM, volume 101)

A conference on Harmonic Analysis on Reductive Groups was held at Bowdoin College in Brunswick, Maine from July 31 to August 11, 1989. The stated goal of the conference was to explore recent advances in harmonic analysis on both real and p-adic groups. It was the first conference since the AMS Summer Sym­ posium on Harmonic Analysis on Homogeneous Spaces, held at Williamstown, Massachusetts in 1972, to cover local harmonic analysis on reductive groups in such detail and to such an extent. While the Williamstown conference was longer (three weeks) and somewhat broader (nilpotent groups, solvable groups, as well as semisimple and reductive groups), the structure and timeliness of the two meetings was remarkably similar. The program of the Bowdoin Conference consisted of two parts. First, there were six major lecture series, each consisting of several talks addressing those topics in harmonic analysis on real and p-adic groups which were the focus of intensive research during the previous decade. These lectures began at an introductory level and advanced to the current state of research. Sec­ ond, there was a series of single lectures in which the speakers presented an overview of their latest research.