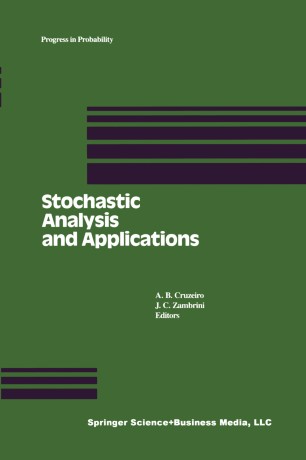 Proceedings of the 1989 Lisbon Conference

Part of the Progress in Probability book series (PRPR, volume 26)

At the end of the summer 1989, an international conference on stochastic analysis and related topics was held for the first time in Lisbon (Portu­ gal). This meeting was made possible with the help of INIC and JNICT, two organizations devoted to the encouragement of scientific research in Portugal. The meeting was interdiciplinary since mathematicians and mathematical physicists from around the world were invited to present their recent works involving probability theory, analysis, geometry and physics, a wide area of cross fertilization in recent years. Portuguese scientific research is expanding fast, these days, faster, some­ times, than the relevant academic structures. The years to come will be determinant for the orientation of those young Portuguese willing to take an active part in the international scientific community. Lisbon's summer 89 meeting should initiate a new Iberic tradition, attrac­ tive both for these researchers to be and, of course, for the selected guests. Judging by the quality of contributions collected here, it is not unrealistic to believe that a tradition of "southern randomness" may well be established.