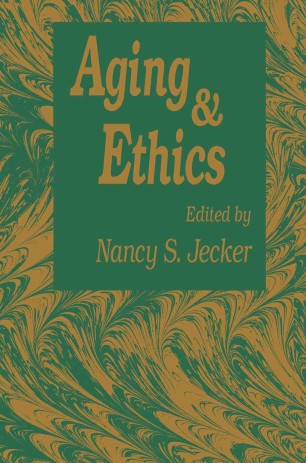 The Aging Self and the Aging Society Ethical issues involving the elderly have recently come to the fore. This should come as no surprise: Since the turn of the century, there has been an eightfold in­ crease in the number of Americans over the age of sixty­ five, and almost a tripling of their proportion to the general population. Those over the age of eighty-five-­ the fastest growing group in the country-are twenty­ one more times as numerous as in 1900. Demographers expect this trend to accelerate into the twenty-first century. The aging of society casts into vivid relief a num­ ber of deep and troubling questions. On the one hand, as individuals, we grapple with the immediate experience of aging and mortality and seek to find in it philosophical or ethical significance. We also wonder what responsi­ bilities we bear toward aging family members and what expectations of others our plans for old age can reasona­ bly include. On the other hand, as a community, we must decide: What special role, if any, do older persons occupy in our society? What constitutes a just distribution of medical resources between generations? And, How can institutions that serve the old foster imperiled values, such as autonomy, self-respect, and dignity? Only recently have we begun to explore these themes, yet already a rich and fruitful literature has grown up around them.

A sound collection, including both classic and new work. It poses an excellent challenge to those setting out to rethink old age.-Ethics