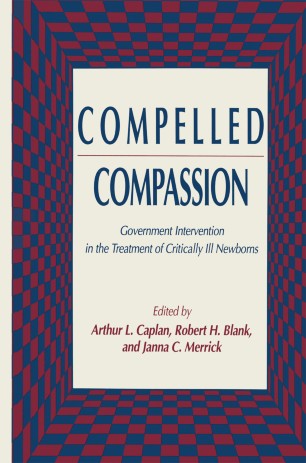 Government Intervention in the Treatment of Critically Ill Newborns

In April 1982, an infant boy was born in Bloomington, Indiana, with Down syndrome and a defective, but surgically correctable, esophagus. His parents refused to consent to surgery or intravenous feeding. The hospital unsuccessfully sought a court order to force treatment, and appeals to higher courts also failed. The child, identified as Baby Doe by the news media, subsequently died. The events in Bloomington became the catalyst for action by the Reagan administration, the courts, and Congress that culminated in a federal policy that makes failure to treat newborns with disabilities a form of child neglect. This book centers on the public policy aspects of withholding treatment from critically ill newborns who are disabled. Specifically, it deals with why the policy was enacted and what impact it has had on health care workers, families, and infants. Some of the contributors to this book spearheaded the early debate on withholding treatment. Anthony Shaw's New York Times Magazine article in 1972 was the first to address these issues in the popular press. The following year, he published a related article in the New England Journal of Medicine. Also appearing in this same issue of NEJM, was the pathbreaking study, coauthored by A. G. M. Campbell, on withholding treatment in the special care nursery at Yale-New Haven Hospital. Each of these articles promoted much public and professional discussion.