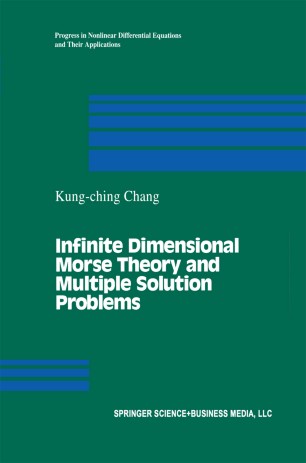 Part of the Progress in Nonlinear Differential Equations and Their Applications book series (PNLDE, volume 6)

The book is based on my lecture notes "Infinite dimensional Morse theory and its applications", 1985, Montreal, and one semester of graduate lectures delivered at the University of Wisconsin, Madison, 1987. Since the aim of this monograph is to give a unified account of the topics in critical point theory, a considerable amount of new materials has been added. Some of them have never been published previously. The book is of interest both to researchers following the development of new results, and to people seeking an introduction into this theory. The main results are designed to be as self-contained as possible. And for the reader's convenience, some preliminary background information has been organized. The following people deserve special thanks for their direct roles in help­ ing to prepare this book. Prof. L. Nirenberg, who first introduced me to this field ten years ago, when I visited the Courant Institute of Math Sciences. Prof. A. Granas, who invited me to give a series of lectures at SMS, 1983, Montreal, and then the above notes, as the primary version of a part of the manuscript, which were published in the SMS collection. Prof. P. Rabinowitz, who provided much needed encouragement during the academic semester, and invited me to teach a semester graduate course after which the lecture notes became the second version of parts of this book. Professors A. Bahri and H. Brezis who suggested the publication of the book in the Birkhiiuser series.