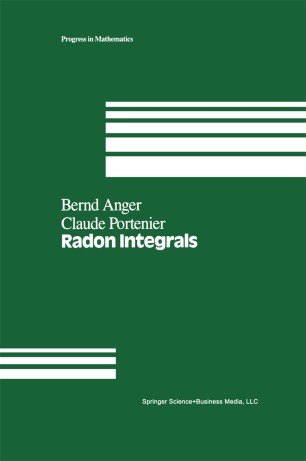 An abstract approach to integration and Riesz representation through function cones

Part of the Progress in Mathematics book series (PM, volume 103)

In topological measure theory, Radon measures are the most important objects. In the context of locally compact spaces, there are two equivalent canonical definitions. As a set function, a Radon measure is an inner compact regular Borel measure, finite on compact sets. As a functional, it is simply a positive linear form, defined on the vector lattice of continuous real-valued functions with compact support. During the last few decades, in particular because of the developments of modem probability theory and mathematical physics, attention has been focussed on measures on general topological spaces which are no longer locally compact, e.g. spaces of continuous functions or Schwartz distributions. For a Radon measure on an arbitrary Hausdorff space, essentially three equivalent definitions have been proposed: As a set function, it was defined by L. Schwartz as an inner compact regular Borel measure which is locally bounded. G. Choquet considered it as a strongly additive right continuous content on the lattice of compact subsets. Following P.A. Meyer, N. Bourbaki defined a Radon measure as a locally uniformly bounded family of compatible positive linear forms, each defined on the vector lattice of continuous functions on some compact subset.