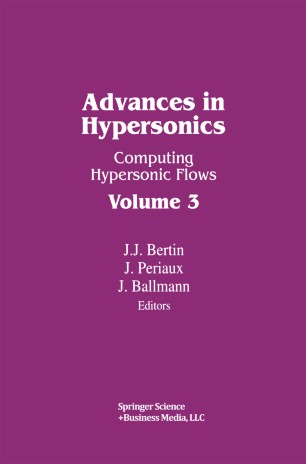 These three volumes entitled Advances in Hypersonics contain the Proceedings of the Second and Third Joint US/Europe Short Course in Hypersonics which took place in Colorado Springs and Aachen. The Second Course was organized at the US Air Force Academy, USA in January 1989 and the Third Course at Aachen, Germany in October 1990. The main idea of these Courses was to present to chemists, com­ puter scientists, engineers, experimentalists, mathematicians, and physicists state of the art lectures in scientific and technical dis­ ciplines including mathematical modeling, computational methods, and experimental measurements necessary to define the aerothermo­ dynamic environments for space vehicles such as the US Orbiter or the European Hermes flying at hypersonic speeds. The subjects can be grouped into the following areas: Phys­ ical environments, configuration requirements, propulsion systems (including airbreathing systems), experimental methods for external and internal flow, theoretical and numerical methods. Since hyper­ sonic flight requires highly integrated systems, the Short Courses not only aimed to give in-depth analysis of hypersonic research and technology but also tried to broaden the view of attendees to give them the ability to understand the complex problem of hypersonic flight. Most of the participants in the Short Courses prepared a docu­ ment based on their presentation for reproduction in the three vol­ umes. Some authors spent considerable time and energy going well beyond their oral presentation to provide a quality assessment of the state of the art in their area of expertise as of 1989 and 1991.