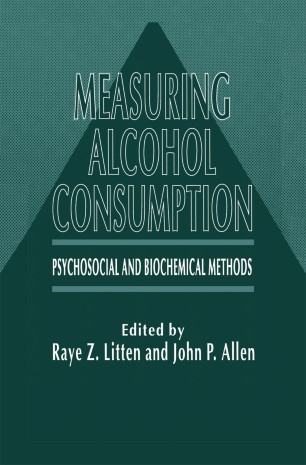 The Importance of Measuring Alcohol Consumption To date, alcohol studies have attended far more to issues of alco­ hol dependence and the harmful consequences of drinking than to the level of alcohol consumption itself. This is, perhaps, not surprising since dependence on alcohol is believed to constitute a meaningful and distinct medical syndrome, regardless of the level of alcohol consumption associated with it (Edwards and Gross, 1976). Also, of society is generally more concerned with the adverse consequences drinking (e. g. , traffic fatalities, homelessness, health care and legal expenses, and academiclbehavioral problems in young drinkers), than with the quantity of alcohol actually consumed. Nevertheless, accurate assessment of alcohol usage is important in its own right in at least four contexts: 1. Evaluating the effectiveness of alcoholism and alcohol abuse treatment and prevention efforts. Such efforts include both applied evaluations of existing programs and formal, well-controlled efficacy studies on experimental interventions. These investigations require rigorous methodologies to assess outcomes precisely and contrast what may be quite subtle differences between programs and between pre­ treatment and posttreatment outcomes. Although these studies are usually characterized by the employment of multiple measures of success-including general improvements in social and physical functioning, reduction in degree of dependence, and resolution of problems directly resultant from drinking-it is by their assessment of changes in drinking behavior that they are potentially able to achieve the highest level of objectivity and exactitude.

Measuring Alcohol Consumption ...is an excellent resource for all those interested, at either a research or clinical level, in alcohol use and misuse ...highly organized, cohesive, integrated and practical...This superbly organized, thorough, and readable book is highly recommended for all those who need to assess alcohol intake. -The Journal of Clinical Pathology
Buy options