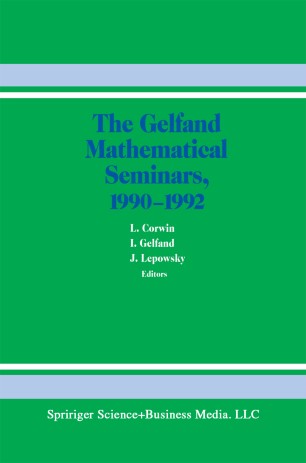 This Seminar began in Moscow in November 1943 and has continued without interruption up to the present. We are happy that with this vol­ ume, Birkhiiuser has begun to publish papers of talks from the Seminar. It was, unfortunately, difficult to organize their publication before 1990. Since 1990, most of the talks have taken place at Rutgers University in New Brunswick, New Jersey. Parallel seminars were also held in Moscow, and during July, 1992, at IRES in Bures-sur-Yvette, France. Speakers were invited to submit papers in their own style, and to elaborate on what they discussed in the Seminar. We hope that readers will find the diversity of styles appealing, and recognize that to some extent this reflects the diversity of styles in a mathematical society. The principal aim was to have interesting talks, even if the topic was not especially popular at the time. The papers listed in the Table of Contents reflect some of the rich variety of ideas presented in the Seminar. Not all the speakers submit­ ted papers. Among the interesting talks that influenced the seminar in an important way, let us mention, for example, that of R. Langlands on per­ colation theory and those of J. Conway and J. McKay on sporadic groups. In addition, there were many extemporaneous talks as well as short discus­ sions.