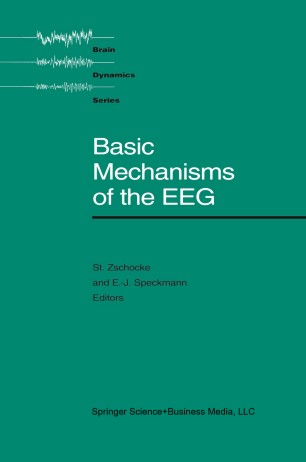 Basic Mechanisms of the EEG

This volume is based on selected and updated papers from the symposium on "Basic Mechanisms of the EEG," which was held under the sponsor­ ship of the German EEG Society in Hamburg on September 28-29, 1990. The intention of this symposium was to relate recent experimental, clini­ cal, and neuropathological data on the basic mechanism that underlie the EEG. Although we know much about these mechanisms, there is still much more to be learned. The symposium was partly the continuation of an earlier symposium on "Origin of Cerebral Field Potentials" held in 1979 in Munster under the leadership of one of the present editors (E. -J. Speckmann) and H. Caspers. The present work combines new experimental and clinical results with state-of-the-art reports giving excellent general views. The first chapter presents a historical survey of the roots of current developments in neu­ rophysiology. It seems that in the near future we may decipher the EEG, which we have considered up to now somewhat as a cryptogram (chap­ ter 2). After chapter 3-a chapter concerned with more general points of the generation of cortical field potentials-chapters 4, 5, and 6 deal with several aspects and models of interactions and rhythms of cortical neurons. The role of glial cells in cortical electrical field generation is considered in chapter 7. Chapter 8 emphasizes the significance of brain metabolism.