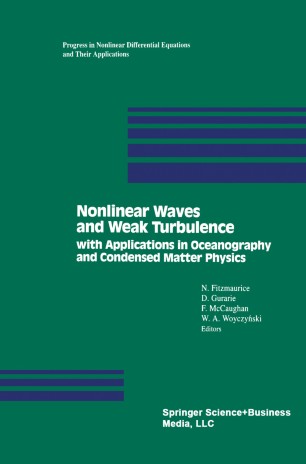 with Applications in Oceanography and Condensed Matter Physics

Part of the Progress in Nonlinear Differential Equations and Their Applications book series (PNLDE, volume 11)

This book is an outgrowth of the NSF-CBMS conference Nonlinear Waves £3 Weak Turbulence held at Case Western Reserve University in May 1992. The principal speaker at the conference was Professor V. E. Zakharov who delivered a series of ten lectures outlining the historical and ongoing developments in the field. Some twenty other researchers also made presentations and it is their work which makes up the bulk of this text. Professor Zakharov's opening chapter serves as a general introduction to the other papers, which for the most part are concerned with the application of the theory in various fields. While the word "turbulence" is most often associated with f:l. uid dynamics it is in fact a dominant feature of most systems having a large or infinite number of degrees of freedom. For our purposes we might define turbulence as the chaotic behavior of systems having a large number of degrees of freedom and which are far from thermodynamic equilibrium. Work in field can be broadly divided into two areas: • The theory of the transition from smooth laminar motions to the disordered motions characteristic of turbulence. • Statistical studies of fully developed turbulent systems. In hydrodynamics, work on the transition question dates back to the end of the last century with pioneering contributions by Osborne Reynolds and Lord Rayleigh.