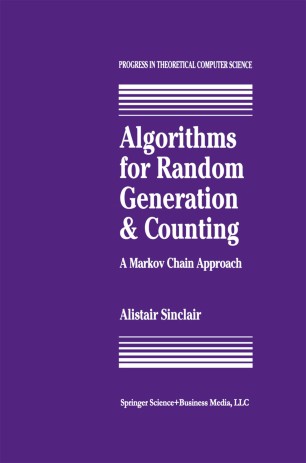 Algorithms for Random Generation and Counting: A Markov Chain Approach

This monograph is a slightly revised version of my PhD thesis [86], com­ pleted in the Department of Computer Science at the University of Edin­ burgh in June 1988, with an additional chapter summarising more recent developments. Some of the material has appeared in the form of papers [50,88]. The underlying theme of the monograph is the study of two classical problems: counting the elements of a finite set of combinatorial structures, and generating them uniformly at random. In their exact form, these prob­ lems appear to be intractable for many important structures, so interest has focused on finding efficient randomised algorithms that solve them ap­ proxim~ly, with a small probability of error. For most natural structures the two problems are intimately connected at this level of approximation, so it is natural to study them together. At the heart of the monograph is a single algorithmic paradigm: sim­ ulate a Markov chain whose states are combinatorial structures and which converges to a known probability distribution over them. This technique has applications not only in combinatorial counting and generation, but also in several other areas such as statistical physics and combinatorial optimi­ sation. The efficiency of the technique in any application depends crucially on the rate of convergence of the Markov chain.