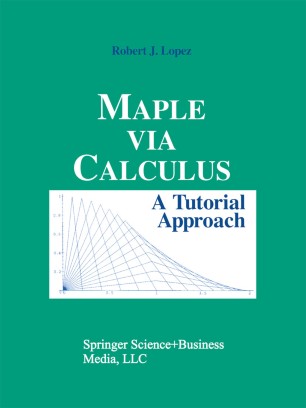 Modern software tools like Maple have the potential to alter radically the way mathematics is taught, learned, and done. Bringing such tools into the classroom during lectures, assignments, and examinations means that new ways oflooking at mathematics can becomepermanent fixtures ofthe curriculum. It is universal access that will make a software-based approach to mathematics become the norm. In 1988, with NSF funding under an III grant, I had the opportunity to bring Maple into the calculus classroom at Rose-Hulman Institute of Technology. Since then a new curriculum based on the availability ofcomputer algebra systems has evolved at RHIT and in my own courses. This volume contains a record of some of the insights gained into pedagogy using Maple in calculus. The activities and ideas captured in these Maple worksheets reflect concepts in calculus imple­ mented in Maple. There is an overt message to the reader that carries with it a side effect. However, it is possible that for one reader the side effect is the message and the message is the side effect! I had intended to put before my audience examples extracted from my Maple based curriculum to entice a wider acceptance ofthe benefits of making a computer algebra system become the basis of a revised calculus syllabus. By examples I had hoped to demonstrate the "rightness" of using software tools for teaching and learning calculus.