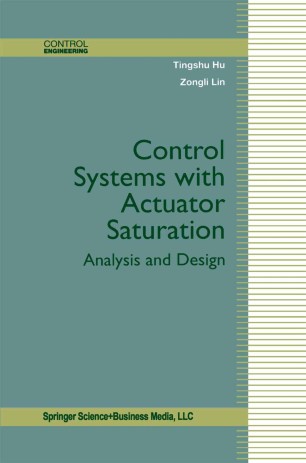 Saturation nonlinearities are ubiquitous in engineering systems. In control systems, every physical actuator or sensor is subject to saturation owing to its maximum and minimum limits. A digital filter is subject to saturation if it is implemented in a finite word length format. Saturation nonlinearities are also purposely introduced into engineering systems such as control sys­ tems and neural network systems. Regardless of how saturation arises, the analysis and design of a system that contains saturation nonlinearities is an important problem. Not only is this problem theoretically challenging, but it is also practically imperative. This book intends to study control systems with actuator saturation in a systematic way. It will also present some related results on systems with state saturation or sensor saturation. Roughly speaking, there are two strategies for dealing with actuator sat­ uration. The first strategy is to neglect the saturation in the first stage of the control design process, and then to add some problem-specific schemes to deal with the adverse effects caused by saturation. These schemes, known as anti-windup schemes, are typically introduced using ad hoc modifications and extensive simulations. The basic idea behind these schemes is to intro­ duce additional feedbacks in such a way that the actuator stays properly within its limits. Most of these schemes lead to improved performance but poorly understood stability properties.