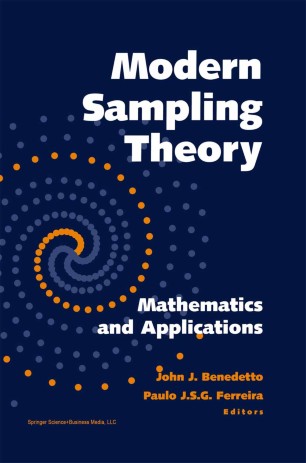 Sampling is a fundamental topic in the engineering and physical sciences. This new edited book focuses on recent mathematical methods and theoretical developments, as well as some current central applications of the Classical Sampling Theorem. The Classical Sampling Theorem, which originated in the 19th century, is often associated with the names of Shannon, Kotelnikov, and Whittaker; and one of the features of this book is an English translation of the pioneering work in the 1930s by Kotelnikov, a Russian engineer. Following a technical overview and Kotelnikov's article, the book includes a wide and coherent range of mathematical ideas essential for modern sampling techniques. These ideas involve wavelets and frames, complex and abstract harmonic analysis, the Fast Fourier Transform (FFT),and special functions and eigenfunction expansions. Some of the applications addressed are tomography and medical imaging. Topics:. Relations between wavelet theory, the uncertainty principle, and sampling; . Multidimensional non-uniform sampling theory and algorithms;. The analysis of oscillatory behavior through sampling;. Sampling techniques in deconvolution;. The FFT for non-uniformly distributed data; . Filter design and sampling; . Sampling of noisy data for signal reconstruction;. Finite dimensional models for oversampled filter banks; . Sampling problems in MRI. Engineers and mathematicians working in wavelets, signal processing, and harmonic analysis, as well as scientists and engineers working on applications as varied as medical imaging and synthetic aperture radar, will find the book to be a modern and authoritative guide to sampling theory.