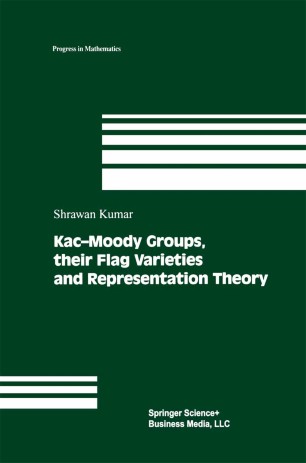 Part of the Progress in Mathematics book series (PM, volume 204)

Kac-Moody Lie algebras 9 were introduced in the mid-1960s independently by V. Kac and R. Moody, generalizing the finite-dimensional semisimple Lie alge­ bras which we refer to as the finite case. The theory has undergone tremendous developments in various directions and connections with diverse areas abound, including mathematical physics, so much so that this theory has become a stan­ dard tool in mathematics. A detailed treatment of the Lie algebra aspect of the theory can be found in V. Kac's book [Kac-90l This self-contained work treats the algebro-geometric and the topological aspects of Kac-Moody theory from scratch. The emphasis is on the study of the Kac-Moody groups 9 and their flag varieties XY, including their detailed construction, and their applications to the representation theory of g. In the finite case, 9 is nothing but a semisimple Y simply-connected algebraic group and X is the flag variety 9 /Py for a parabolic subgroup p y C g.