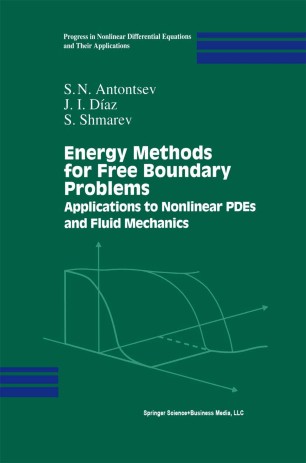 Part of the Progress in Nonlinear Differential Equations and Their Applications book series (PNLDE, volume 48)

For the past several decades, the study of free boundary problems has been a very active subject of research occurring in a variety of applied sciences. What these problems have in common is their formulation in terms of suitably posed initial and boundary value problems for nonlinear partial differential equations. Such problems arise, for example, in the mathematical treatment of the processes of heat conduction, filtration through porous media, flows of non-Newtonian fluids, boundary layers, chemical reactions, semiconductors, and so on. The growing interest in these problems is reflected by the series of meetings held under the title "Free Boundary Problems: Theory and Applications" (Ox­ ford 1974, Pavia 1979, Durham 1978, Montecatini 1981, Maubuisson 1984, Irsee 1987, Montreal 1990, Toledo 1993, Zakopane 1995, Crete 1997, Chiba 1999). From the proceedings of these meetings, we can learn about the different kinds of mathematical areas that fall within the scope of free boundary problems. It is worth mentioning that the European Science Foundation supported a vast research project on free boundary problems from 1993 until 1999. The recent creation of the specialized journal Interfaces and Free Boundaries: Modeling, Analysis and Computation gives us an idea of the vitality of the subject and its present state of development. This book is a result of collaboration among the authors over the last 15 years.