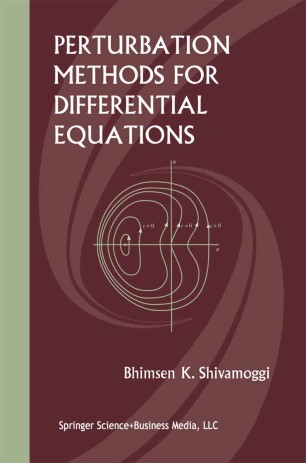 In nonlinear problems, essentially new phenomena occur which have no place in the corresponding linear problems. Therefore, in the study of nonlinear problems the major purpose is not so much to introduce methods that improve the accuracy of linear methods, but to focus attention on those features of the nonlinearities that result in distinctively new phenomena. Among the latter are - * existence of solutions ofperiodic problems for all frequencies rather than only a setofcharacteristic values, * dependenceofamplitude on frequency, * removal ofresonance infinities, * appearance ofjump phenomena, * onsetofchaotic motions. On the other hand, mathematical problems associated with nonlinearities are so complex that a comprehensive theory of nonlinear phenomena is out of the question.' Consequently, one practical approach is to settle for something less than complete generality. Thus, one gives up the study of global behavior of solutions of a nonlinear problem and seeks nonlinear solutions in the neighborhood of (or as perturbations about) a known linear solution. This is the basic idea behind a perturbative solutionofa nonlinear problem.

"The book is concerned...with singular perturbation phenomena for ordinary and partial differential equations.  Instead of presenting general theory, the author shows how various perturbation techniques work in concrete examples. . . . Applications are quite numerous and include fluid dynamics, solid mechanics, and plasma physics. . . . A great variety of examples coming from real applications makes the book a very nice source for courses on perturbation methods.  A number of exercises together with appendices covering some mathematical topics used in the text help a lot in making it practically self-contained."   —Mathematical Reviews

This book is focused on perturbation methods mainly applied to solve both ordinary and partial differential equations … One of the unusual features of the treatment is motivated by the author’s notes devoted to a mix of students in applied mathematics, physics, and engineering. Therefore, it is intended to serve as a textbook for undergraduate students of the previously mentioned branches of science. The book can serve also as an example of how an asymptotic analysis may easily move between various disciplines … Since the book covers a great deal of material, it is recommended to students and researchers already familiar with solid and fluid mechanics, as well as with plasma physics.”   —Applied Mechanics Review

"This monograph presents an overall introduction to singular perturbation methods…. [It] aims to describe the procedures and the intuitive ideas underlying the above methods. The author deliberately side-stepped the theoretical aspects and the mathematical proofs. Also, the theory is principally explained from examples. The result is a variety of problems, some of them with a physical background which is briefly described…. The exposition of ideas and computations are quite clear. The mathematics used by the author does not go far beyond an advanced calculus course…. It is valuable to have a book that can be used as a graduate text for students in applied mathematics, physics and engineering. The present book achieves this goal. It…will be useful to engineers and applied mathematicians who wish to obtain some, possibly formal, answer[s] to their problems. It can also be used by the mathematician as an overview o[f] the field…. As a conclusion, this work can be recommended as a good textbook for a graduate course in applied mathematics."   —Zentralblatt Math

"The book is devoted to the subject of seeking nonlinear solutions in the neighborhood (or as a perturbation) about a known linear solutions. It adopts a straightforward intuitive approach and pays more attention to the procedures and underlying ideas than to mathematical rigour."   —Quarterly of Appl. Math.

"This book presents the regular pertubation methods for differential and partial differential equations. Other methods...are also [presented in detail]. Very important is the fact that each chapter contains certain important applications, especially to fluid dynamics, but also to solid mechanics and plasma physics. Moreover, each chapter contains a section of specific exercises, and an appendix with basic mathematical tools. Many methods and procedures are very well described without technical proofs.... [The book] can serve as a textbook for undergraduate students in applied mathematics, physics, and engineering. Researchers in these areas will also find the book an excellent reference."   —Rev. D'Anal. Num. Théorie de L'Approx.

"The present textbook shows how to find approximate solutions to nonlinear differential equations (both ordinary and partial) by means of asymptotic expansions. It discusses different singular perturbation methods (strained parameters, averaging, matched asymptotic expansions, multiple-scale, and quantum-field-theoretic renormalization) in an informal manner using specific examples from applications. It is easy to read and suitable for advanced undergraduate students requiring only some basic knowledge of [ODEs]."   —Monatshefte für Mathematik