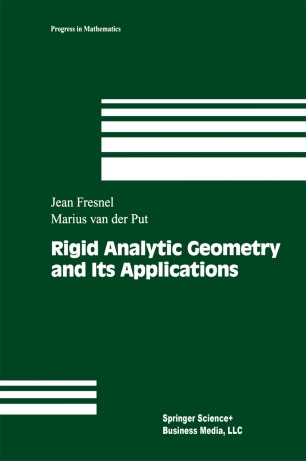 Part of the Progress in Mathematics book series (PM, volume 218)

"… beginners will appreciate the numerous exercises and the gentle progression of the first four chapters, from the one-variable calculus on the projective line, through the algebraic study of general affinoid algebras, to the definition of general rigid varieties and their analytic reductions. And each of the last five chapters can be used as the basis for a student workshop at the advanced graduate level."   —Mathematical Reviews

"When I was a graduate student, we used the original (French) version of this book in an informal seminar on rigid geometry. It was quite helpful then, and it is much better now. The authors have updated the material, added quite a bit on new applications and new results, and changed languages. Despite the competition it now has, this is still one of the best places in which to start learning this theory."   —MAA Reviews

"The book under review gives a very complete and careful introduction into the technical foundations of the theory and also treats in detail the rigid analytic part of some of the important applications which the theory has found in recent years in number theory and geometry.  The exposition is self contained, the authors only assume some familarity with basic algebraic geometry. . . Many of the subjects treated in this book are not easily available from the literature.  The book which contains an extensive bibliography is a very valuable source for everyone wishing to learn about rigid geometry or its applications."