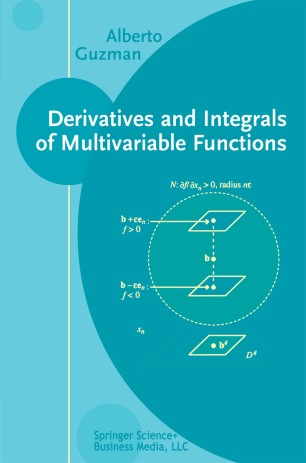 Derivatives and Integrals of Multivariable Functions

This text is appropriate for a one-semester course in what is usually called ad­ vanced calculus of several variables. The approach taken here extends elementary results about derivatives and integrals of single-variable functions to functions in several-variable Euclidean space. The elementary material in the single- and several-variable case leads naturally to significant advanced theorems about func­ tions of multiple variables. In the first three chapters, differentiability and derivatives are defined; prop­ erties of derivatives reducible to the scalar, real-valued case are discussed; and two results from the vector case, important to the theoretical development of curves and surfaces, are presented. The next three chapters proceed analogously through the development of integration theory. Integrals and integrability are de­ fined; properties of integrals of scalar functions are discussed; and results about scalar integrals of vector functions are presented. The development of these lat­ ter theorems, the vector-field theorems, brings together a number of results from other chapters and emphasizes the physical applications of the theory.