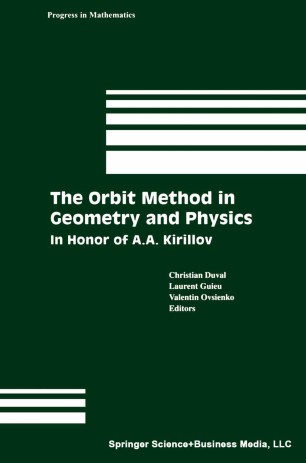 The Orbit Method in Geometry and Physics

In Honor of A.A. Kirillov

Part of the Progress in Mathematics book series (PM, volume 213)

The volume is dedicated to AA. Kirillov and emerged from an international con­ ference which was held in Luminy, Marseille, in December 2000, on the occasion 6 of Alexandre Alexandrovitch's 2 th birthday. The conference was devoted to the orbit method in representation theory, an important subject that influenced the de­ velopment of mathematics in the second half of the XXth century. Among the famous names related to this branch of mathematics, the name of AA Kirillov certainly holds a distinguished place, as the inventor and founder of the orbit method. The research articles in this volume are an outgrowth of the Kirillov Fest and they illustrate the most recent achievements in the orbit method and other areas closely related to the scientific interests of AA Kirillov. The orbit method has come to mean a method for obtaining the representations of Lie groups. It was successfully applied by Kirillov to obtain the unitary rep­ resentation theory of nilpotent Lie groups, and at the end of this famous 1962 paper, it was suggested that the method may be applicable to other Lie groups as well. Over the years, the orbit method has helped to link harmonic analysis (the theory of unitary representations of Lie groups) with differential geometry (the symplectic geometry of homogeneous spaces). This theory reinvigorated many classical domains of mathematics, such as representation theory, integrable sys­ tems, complex algebraic geometry. It is now a useful and powerful tool in all of these areas.