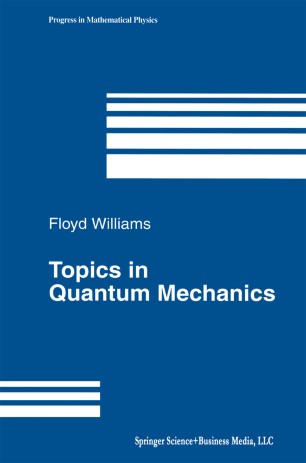 Quantum mechanics and quantum field theory are highly successful physical theo­ ries that have numerous practical applications. Largely mathematical in character, these theories continue to stimulate the imaginations of applied mathematicians and purists as weIl. In recent years, in particular, as a new array of tools have emerged, including a representative amount from the domain of so-called pure mathematics, interest in both the conceptual and physical aspects of these beau­ tiful subjects has especially blossomed. Given the emergence of newer and of­ ten spectacular applications of mathematics to quantum theory, and to theoretical physics in general, one notes that certain communication gaps between physicists and mathematicians continue to be bridged. This text on quantum mechanics, designed primarily for mathematics students and researchers, is an attempt to bridge further gaps. Although the mathematical style presented is generally precise, it is counterbalanced at some points by a re­ laxation of precision, as our overall purpose is to capture the basic fiavor of the subject both formally and intuitively. The approach is one in which we attempt to maintain sensitivity with respect to diverse backgrounds of the readers, including those with modest backgrounds in physics. Thus we have included several con­ crete computational examples to fortify stated principles, several appendices, and certain basic physical concepts that help to provide for a reasonably self-contained account of the material, especially in the first 11 chapters.

". . . a number of interesting and classical applications (some involving detailed computations) are included. Most of the book is dedicated to covering the traditional material but there are also some innovations, both in the choice of topics and in the way they are presented. . . . overall, I shall say that this is a very good text that is welcome both from the conceptual and the operational points of view. The theoretical physics community should also find here a good source on the subject."