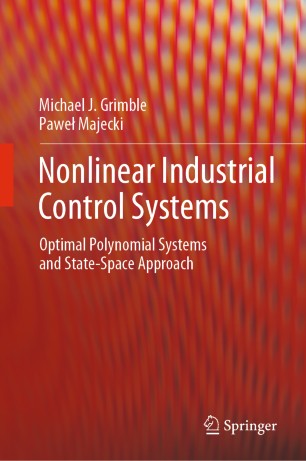 Nonlinear Industrial Control Systems presents a range of mostly optimisation-based methods for severely nonlinear systems; it discusses feedforward and feedback control and tracking control systems design. The plant models and design algorithms are provided in a MATLAB® toolbox (downloadable from www.springer.com/978-1-4471-7455-4) that enable both academic examples and industrial application studies to be repeated and evaluated, taking into account practical application and implementation problems.

Nonlinear Industrial Control Systems is valuable to engineers in industry dealing with actual nonlinear systems. It provides students with a comprehensive range of techniques and examples for solving real nonlinear control design problems.

Michael John Grimble was awarded a first class BSc honours degree in Electrical Engineering in 1970 from Rugby College of Technology. Subsequently he obtained MSc (1971), PhD (1974) and DSc (1982) degrees in Control Engineering from the University of Birmingham and a BA degree in Mathematics from the Open University. He was an apprentice at Ciba-Geigy in Grimsby and after training worked as a systems design engineer for GEC Electrical Projects at Rugby. He was appointed a Professor of Industrial Systems at the University of Strathclyde in Glasgow, in 1981, where he established the Industrial Control Centre.  He is a research professor in the Department of Electronic and Electrical Engineering. His research interests are nonlinear and robust control, estimation theory, optimal control, adaptive control and applications.

He is the Technical Director of Industrial Systems and Control Ltd., a company he began with University support more than 30 years ago. He is a founder and a past Chairman of the UKRI Chapter of the IEEE Control Systems Society, has contributed to numerous IEEE and IFAC committees, and chaired their conferences. He is the Managing Editor of the following journals published by Wiley: International Journal of Robust and Nonlinear Control, International Journal of Adaptive Control & Signal Processing, Journal of Optimal Control Applications and Methods and the new journal on Advanced Control Applications: Engineering and Industrial Systems. He was the editor of the Prentice Hall International Series in Systems and Control Engineering. He is currently a joint editor of the Springer monograph series Advances in Industrial Control and of the Springer text book series on Advanced Textbooks on Control and Signal Processing.

The Institution of Electrical Engineers presented him with the Heaviside Premium in 1978 for his papers on control engineering. The following year, 1979, he was awarded jointly the Coopers Hill War Memorial Prize and Medal by the Institutions of Electrical, Mechanical and Civil Engineering. The Institute of Measurement and Control awarded him the 1991 Honeywell International Medal. He was elected to a Fellow of the IET in 1974, IMA in 1982, and Institute of Measurement and Control in 1990, and Fellow of the IEEE in January 1993. He was recognised at the 1993 Edinburgh International Science Festival as one of Scotland’s four most cited Scientists, and was elected a Fellow of the Royal Society of Edinburgh in March 1999.

Dr Pawel Majecki is a Senior Consultant at Industrial System and Control Ltd. (ISC Ltd) since September 2011. Pawel was born in Zabrze, Poland in 1978. He graduated from Silesian University of Technology, Gliwice, Poland in 2002 with a MEng (Hons) in Automatic Control and Robotics and the PhD degree in Electronic and Electrical Engineering from the University of Strathclyde in Glasgow, UK in 2006.

He worked as a Research Fellow at the Industrial Control Centre of the University of Strathclyde on non-linear control algorithms design. He was involved in a project concerned with optimizing petrochemical and process plant outputs using new performance assessment and benchmarking tools.

In the past, he was also employed on the project CHEOPS (Cryogenic Helium for Optimized System), working on the modeling, simulation and control of cryogenic refrigeration systems. The position was funded by CNRS (Centre National de Recherche Scientifique) and involved cooperation between GIPSA-lab at INP Grenoble and the Institute of Nanosciences and Cryogenics at CEA, Grenoble, where the real system was located.

In the current position of a technical consultant in the ISC, he has worked on control modeling and design projects for automotive, wind energy and marine sectors. He is also involved in preparing and delivering training courses on various aspects of control theory, estimation, system identification and optimization.