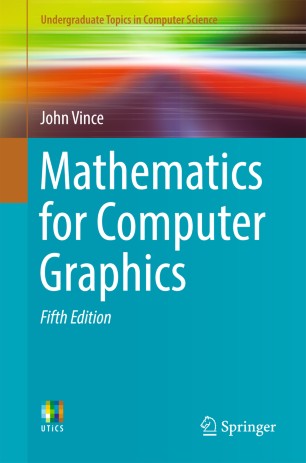 The first five chapters cover a general introduction, number sets, algebra, trigonometry and coordinate systems, which are employed in the following chapters on vectors, matrix algebra, transforms, interpolation, curves and patches, analytic geometry and barycentric coordinates. Following this, the reader is introduced to the relatively new topic of geometric algebra, followed by two chapters that introduce differential and integral calculus. Finally, there is a chapter on worked examples.

Mathematics for Computer Graphics covers all of the key areas of the subject, including:

This fifth edition contains over 120 worked examples and over 320 colour illustrations, which are central to the author’s descriptive writing style. Mathematics for Computer Graphics provides a sound understanding of the mathematics required for computer graphics, giving a fascinating insight into the design of computer graphics software and setting the scene for further reading of more advanced books and technical research papers.

Professor John Vince began working in computer graphics at Middlesex Polytechnic in 1968. His research activities centered on computer animation software and resulted in the PICASO and PRISM animation systems. Whilst at Middlesex, he designed the UK’s first MSc course in Computer Graphics and developed a popular program of short courses in computer animation for television designers. In 1986 he joined Rediffusion Simulation as a Research Consultant and worked on the development of real-time computer systems for commercial flight simulators. In 1992 he was appointed Chief Scientist of Thomson Training Simulation Ltd. In 1995 he was appointed Professor of Digital Media at the National Centre for Computer Animation at Bournemouth University and in 1999 he was made Head of Academic Group for Computer Animation. He was awarded a DSc by Brunel University in recognition of his work in computer graphics. He has written and edited over 40 books on computer graphics, computer animation and virtual reality, including the following Springer titles:

• Expanding the Frontiers of Visual Analytics and Visualization (2012)

“A broad range of mathematical topics is covered in the 18 chapters of this book. … I think this is a very useful book and I highly recommend it as a reference for those who are studying or working in computer-graphics-related fields.” (Zhaoqiang Lai, Computing Reviews, April, 2018)​

“The book’s target audience is computer graphics students and professionals in this area. … the information is presented in a minimalist fashion and is very easy to digest. Highly recommended for its crispness and the quality of the material.” (Naga Narayanaswamy, Computing Reviews, July, 2018)