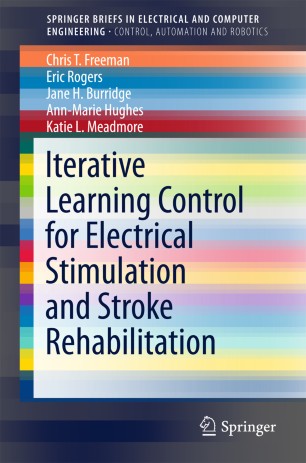 Iterative learning control (ILC) has its origins in the control of processes that perform a task repetitively with a view to improving accuracy from trial to trial by using information from previous executions of the task. This brief shows how a classic application of this technique – trajectory following in robots – can be extended to neurological rehabilitation after stroke.
Regaining upper limb movement is an important step in a return to independence after stroke, but the prognosis for such recovery has remained poor. Rehabilitation robotics provides the opportunity for repetitive task-oriented movement practice reflecting the importance of such intense practice demonstrated by conventional therapeutic research and motor learning theory. Until now this technique has not allowed feedback from one practice repetition to influence the next, also implicated as an important factor in therapy. The authors demonstrate how ILC can be used to adjust external functional electrical stimulation of patients’ muscles while they are repeatedly performing a task in response to the known effects of stimulation in previous repetitions. As the motor nerves and muscles of the arm reaquire the ability to convert an intention to move into a motion of accurate trajectory, force and rapidity, initially intense external stimulation can now be scaled back progressively until the fullest possible independence of movement is achieved.