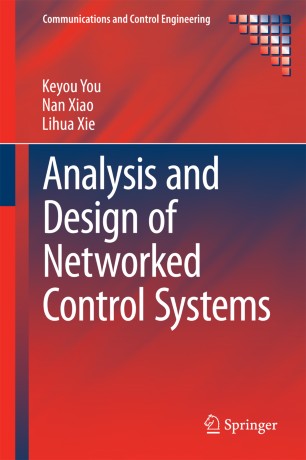 This monograph focuses on characterizing the stability and performance consequences of inserting limited-capacity communication networks within a control loop. The text shows how integration of the ideas of control and estimation with those of communication and information theory can be used to provide important insights concerning several fundamental problems such as:

·         minimum network requirement for stabilization of linear systems over fading channels; and

A fundamental link is revealed between the topological entropy of linear dynamical systems and the capacities of communication channels. The design of a logarithmic quantizer for the stabilization of linear systems under various network environments is also extensively discussed and solutions to many problems of Kalman filtering with intermittent observations are demonstrated.

Analysis and Design of Networked Control Systems will interest control theorists and engineers working with networked systems and may also be used as a resource for graduate students with backgrounds in applied mathematics, communications or control who are studying such systems.

Keyou You was born in Jiangxi Province, China, in 1985. He received the B.S. degree in statistical science from Sun Yat-sen University, Guangzhou, China, in 2007 and the Ph.D. degree in electrical and electronic engineering from Nanyang Technological University, Singapore, in 2012. He was with the ARC Center for Complex Dynamic Systems and Control, the University of Newcastle, Australia, as a visiting scholar from May 2010 to July 2010, and with the Sensor Network Laboratory at Nanyang Technological University as a Research Fellow from June 2011 to June 2012. Since July 2012, he has been with the Department of Automation, Tsinghua University, China as an Assistant Professor. From May 2013 to July 2013, he held a visiting position in The Hong Kong University of Science and Technology, Hong Kong. His current research interests include control and estimation of networked systems, distributed control and estimation, and sensor network. Dr. You won the Guan Zhaozhi best paper award at the 29th Chinese Control Conference, Beijing, China, in 2010, and was selected to the “National 1000 Young Talents Plan” in 2013.

Nan Xiao received the B.E. and M.E. degrees in electrical engineering and automation from Tianjin University, China in 2005 and 2007, respectively, and the Ph.D. degree in electrical and electronic engineering from Nanyang Technological University, Singapore in 2012. Currently, he is a postdoctoral fellow in the school of electrical and electronic engineering, Nanyang Technological University. His research interests include networked control systems, and robust and stochastic control theory.

Lihua Xie received the Ph.D. degree in electrical engineering from the University of Newcastle, Australia. Currently, he is a professor and head of division of control and instrumentation in the School of Electrical and Electronic Engineering, Nanyang Technological University, Singapore. His research interests include robust control and estimation, networked control systems, sensor networks, time delay systems and control of hard disk drive systems. Dr. Xie is an editor of the IET Book Series on Control and has served as an Associate Editor of several journals including the IEEE Transactions on Automatic Control, Automatica etc. He is a Fellow of the IEEE and Fellow of the International Federation of Automatic Control.