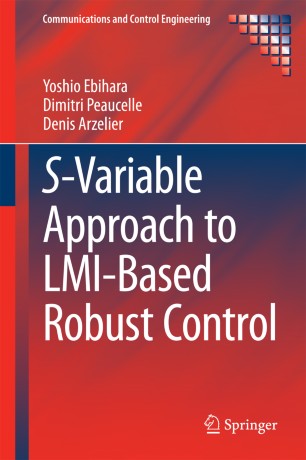 This book shows how the use of S-variables (SVs) in enhancing the range of problems that can be addressed with the already-versatile linear matrix inequality (LMI) approach to control can, in many cases, be put on a more unified, methodical footing. Beginning with the fundamentals of the SV approach, the text shows how the basic idea can be used for each problem (and when it should not be employed at all). The specific adaptations of the method necessitated by each problem are also detailed. The problems dealt with in the book have the common traits that: analytic closed-form solutions are not available; and LMIs can be applied to produce numerical solutions with a certain amount of conservatism. Typical examples are robustness analysis of linear systems affected by parametric uncertainties and the synthesis of a linear controller satisfying multiple, often  conflicting, design specifications. For problems in which LMI methods produce conservative results, the SV approach is shown to achieve greater accuracy.

The authors emphasize the simplicity and easy comprehensibility of the SV approach and show how it can be implemented in programs without difficulty so that its power becomes readily apparent. The S-Variable Approach to LMI-Based Robust Control is a useful reference for academic control researchers, applied mathematicians and graduate students interested in LMI methods and convex optimization and will also be of considerable assistance to practising control engineers faced with problems of conservatism in their systems and controllers.

Yoshio Ebihara was born in Fukuoka, Japan on 12th May 1974. He received the D.E. degree in electrical engineering from Kyoto University in 2002. Since 2002 he has been in the Department of Electrical Engineering at Kyoto University where he was made an Associate Professor in 2010. He was the recipient of the 2002 American Control Conference Best Student Paper award and the SICE Annual Conference 2009 International Award.
Born in in Leningrad, 2nd March 1974, Dimitri Peaucelle received his PhD from the Paul Sabatier University, Toulouse, France in July 2000. He is now a CNRS researcher at the Laboratory for Analysis and Systems Architecture. He is currently a member of the IFAC Technical Committee on Robust Control, the head of the CNRS working group on methods and tools for robust analysis and control design and Scientific Secretary of the Scientific Council of the CNRS Information and Engineering Department. He was the organizer of the 2006 IFAC ROCOND Symposium and is the NOC Chair of the IFAC 2017 World Congress Steering Committee.