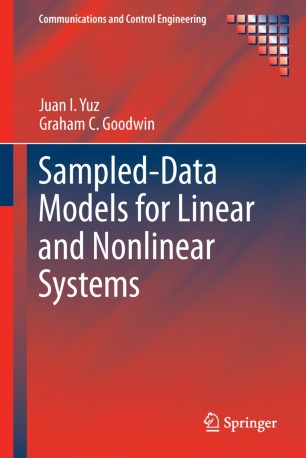 Sampled-data Models for Linear and Nonlinear Systems provides a fresh new look at a subject with which many researchers may think themselves familiar. Rather than emphasising the differences between sampled-data and continuous-time systems, the authors proceed from the premise that, with modern sampling rates being as high as they are, it is becoming more appropriate to emphasise connections and similarities. The text is driven by three motives:

·      the ubiquity of computers in modern control and signal-processing equipment means that sampling of systems that really evolve continuously is unavoidable;

·      although superficially straightforward, sampling can easily produce erroneous results when not treated properly; and

·      the need for a thorough understanding of many aspects of sampling among researchers and engineers dealing with applications to which they are central.

The authors tackle many misconceptions which, although appearing reasonable at first sight, are in fact either partially or completely erroneous. They also deal with linear and nonlinear, deterministic and stochastic cases. The impact of the ideas presented on several standard problems in signals and systems is illustrated using a number of applications.

Academic researchers and graduate students in systems, control and signal processing will find the ideas presented in Sampled-data Models for Linear and Nonlinear Systems to be a useful manual for dealing with sampled-data systems, clearing away mistaken ideas and bringing the subject thoroughly up to date. Researchers in statistics and economics will also derive benefit from the reworking of ideas relating a model derived from data sampling to an original continuous system.

“The book treats the classical subject of discretization with an interesting and more current perspective. Graduate students and researchers in areas such as systems, control, and signal processing will find this book a useful reference.” (Hideaki Ishii, Mathematical Reviews, October, 2015)