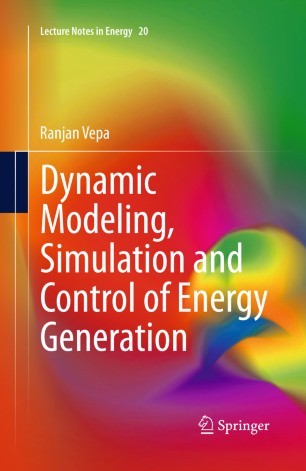 This book addresses the core issues involved in the dynamic modeling, simulation and control of a selection of energy systems such as gas turbines, wind turbines, fuel cells and batteries. The principles of modeling and control could be applied to other non-convention methods of energy generation such as solar energy and wave energy.

A central feature of Dynamic Modeling, Simulation and Control of Energy Generation is that it brings together diverse topics in thermodynamics, fluid mechanics, heat transfer, electro-chemistry, electrical networks and electrical machines and focuses on their applications in the field of energy generation, its control and regulation. This book will help the reader understand the methods of modelling energy systems for controller design application as well as gain a basic understanding of the processes involved in the design of control systems and regulators. It will also be a useful guide to simulation of the dynamics of energy systems and for implementing monitoring systems based on the estimation of internal system variables from measurements of observable system variables.

Dynamic Modeling, Simulation and Control of Energy Generation will serve as a useful aid to designers of hybrid power generating systems involving advanced technology systems such as floating or offshore wind turbines and fuel cells. The book introduces case studies of the practical control laws for a variety of energy generation systems based on nonlinear dynamic models without relying on linearization. Also the book introduces the reader to the use nonlinear model based estimation techniques and their application to energy systems

Ranjan Vepa is a Lecturer with the School of Engineering and Material Science at Queen Mary, University of London as well as the Programme Director for the Avionics Programme. He received his Ph.D. in Applied Mechanics from Stanford University in 1975, specializing in the area of Aeroelasticity under the guidance of the late Prof. Holt Ashley. Prior to joining Queen Mary he was with NASA Langley Research Center, where he was awarded a National Research Council Fellowship and conducted research in the area of unsteady aerodynamic modelling for active control applications. Subsequently he was with the Structures Division of the National Aeronautical Laboratory, Bangalore India and the Indian Institute of Technology, Madras, India. Ranjan was invited by Queen Mary College, in 1984, as a Visiting Fellow by Prof. G. J. Hancock. He has been a pioneer in modeling unsteady aerodynamic and aeroelastic systems for control applications. He is a pro-active researcher and in the forefront of the application of new methods and technologies to applied control systems.

Ranjan's current and primary research is in the area of smart structures and their applications. He is also applying the distributed systems control-theoretic approach to the monitoring and control of structures and the flight control and simulation of UAV flight. Significant progress has been made in the design and development of novel micro-sensors, micro-actuators and filters for implementing the smart actuation of aerofoils and structural health monitoring with application to compressors and turbines including wind turbines. Other related research interests include dynamics and robust adaptive estimation and control of linear and nonlinear aerospace renewable energy and propulsion systems with parametric and dynamic uncertainties including the integration of fuel cells and batteries with gas turbine engines. Ranjan is a staunch believer in interdisciplinary research and also undertakes research on the control of biodynamic systems and on the design and development of smart prosthetic devices. He has an interest in the application of optimal control theory to prosthetic devices for smart limbs as well as to inhibit the occurrence of cardiac arrhythmias.