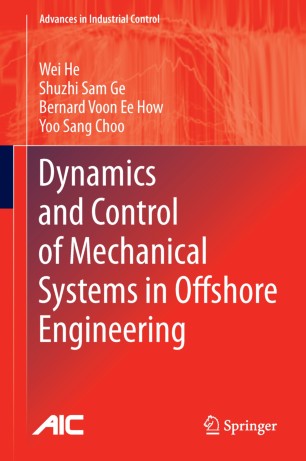 Dynamics and Control of Mechanical Systems in Offshore Engineering

Dynamics and Control of Mechanical Systems in Offshore Engineering is a comprehensive treatment of marine mechanical systems (MMS) involved in processes of great importance such as oil drilling and mineral recovery. Ranging from nonlinear dynamic modeling and stability analysis of flexible riser systems, through advanced control design for an installation system with a single rigid payload attached by thrusters, to robust adaptive control for mooring systems, it is an authoritative reference on the dynamics and control of MMS. Readers will gain not only a complete picture of MMS at the system level, but also a better understanding of the technical considerations involved and solutions to problems that commonly arise from dealing with them.

·         a complete framework of dynamical analysis and control design for marine mechanical systems;

·         new results on the dynamical analysis of riser, mooring and installation systems together with a general modeling method for a class of MMS;

·         a general method and strategy for realizing the control objectives of marine systems with guaranteed stability the effectiveness of which is illustrated by extensive numerical simulation; and

Most of the results presented are analytical with repeatable design algorithms with proven closed-loop stability and performance analysis of the proposed controllers is rigorous and detailed.

Dynamics and Control of Mechanical Systems in Offshore Engineering is primarily intended for researchers and engineers in the system and control community, but graduate students studying control and marine engineering will also find it a useful resource as will practitioners working on the design, running or maintenance of offshore platforms.

Dr Wei He received his PhD from Department of Electrical & Computer Engineering, the National University of Singapore (NUS), Singapore, in 2011, his M.Eng. and B.Eng. degrees both in automatic control from School of Automation Science and Engineering, South China University of Technology (SCUT), Guangzhou, China, in 2008 and 2006 respectively. He was a Research Fellow at the Department of Electrical & Computer Engineering, and the Centre for Offshore Research & Engineering (CORE), the National University of Singapore (NUS), Singapore, from January 2011 to March 2012. He is currently working as the Associate Professor at School of Automation Engineering and Robotics Institute, University of Electronic Science and Technology of China (UESTC). He is the member of the IEEE and the member of IEEE Control System Society (CSS). He serves as theEditor of Journal of Intelligent & Robotic Systems, Springer. His current research interests include marine cybernetics, intelligent control systems and robotics.

Professor Shuzhi Sam Ge obtained his PhD from Imperial College in 1993. He is a member of the Centre for Offshore Research & Engineering (CORE) and Director of the Social Robotics Lab, Interactive Digital Media Institute, NUS. He has (co)-authored 5 books in robotics and intelligent control, and edited a book on autonomous robots, and over 180 international journal papers. In Scopus index, his total number of citations excluding self citations is 3650, and his H-index is 35. He has experience of managing multi-million dollar projects across University, Research Institute and Industry for successful and smooth delivery, were recognized by the National Technology Award in 1999 for a SMART robotic system, and the Temasek Young Investigator Award in 2002 for Intelligent Control of Unmanned Vehicles.
He is a Fellow of IEEE, IFAC and IET. He served as the Vice President of Technical Activities, 2009-2010, and the Vice President for Membership Activities, 2011-2012, IEEE Control Systems Society. He is the Editor-in-Chief of the International Journal of Social Robotics. He has served/been serving as an Associate Editor for a number of flagship journals including IEEE Transactions on Automatic Control, IEEE Transactions on Control Systems Technology, IEEE Transactions on Neural Networks, and Automatica. He serves as an Editor of the Taylor & Francis Automation and Control Engineering Series. He researches in intelligent control and its applications including electromechanical systems, flexible marine riser, subsea installation, HDDs, robotic manipulators, and general nonlinear systems. He also provides technical consultancy to industrial and government agencies.

Dr Bernard Voon Ee How received the Ph.D. and B.Eng. (Hons) degrees, both in electrical and computer engineering (ECE) from the NUS in 2010 and 2005 respectively. He is currently Research Engineer with Keppel Offshore and Marine Technology Center (KOMtech) where he is heading the Control group. He is executive member of the IEEE Oceanic Engineering Society, Singapore Chapter since 2010. He was Research Fellow with the Centre for Offshore Research and Engineering (CORE), Department of Civil Engineering (CE), NUS, 2010.  For the entire duration of his PhD candidature at the Department of ECE, he was concurrently employed as a Research Engineer at the CORE, CE, NUS. He was a recipient of the Training Attachment Program funding by the Economic Development Board (EDB) of Singapore under the Oil & Gas and Offshore Engineering Technologies program. He worked 5 months offshore on pipe laying barge DB 60, J. Ray McDermott in Tierra del Fuego, Argentina in 2004.

Professor Yoo Sang Choo is the Lloyd’s Register Educational Trust Chair Professor and Director (Research), CORE at National University of Singapore. He is Immediate Past President of The Institute of Marine Engineering Science & Technology (IMarEST) from March 2009. The Institute was established in London in 1889, and is the leading international membership body and learned society for marine professionals, with over 15,000 members worldwide.
He worked on structural behaviour of deepsea production systems before joining VO Offshore (U.K.) to design floating and fixed offshore structures. He returned to Singapore in 1984 and worked for McDermott South East Asia on the design, analysis and installation of offshore platforms. He joined the National University of Singapore in 1987, and served as Director of CAE/CAD/CAM Centre from 1995 to 1999.
He served in many international scientific/technical committees and organized conferences and workshops. He is a Past President of the Singapore Structural Steel Society (SSSS). He is member of IIW Sub-commission XV-E: Tubular Structures, and Chairman of Singapore Mirror Committee for ISO TC67 SC7 for offshore structures. He is a member of Standing Committee in International Ship and Offshore Structures Congress. He is a recipient of various recognitions, including Lifetime Achievement Award-Maritime Academics, ISOPE Awards, Stanley Gray Award, IES Prestigious Engineering Achievement Award, James Watt Medal and Stanley Gray Medal. He is Honorary Fellow of SSSS, Fellow of IMarEST and the Royal Institution of Naval Architects, Chartered Engineer (in UK) and Professional Engineer (in Singapore). He has served as technical consultant in major offshore projects, and led or participated in international joint industry projects.