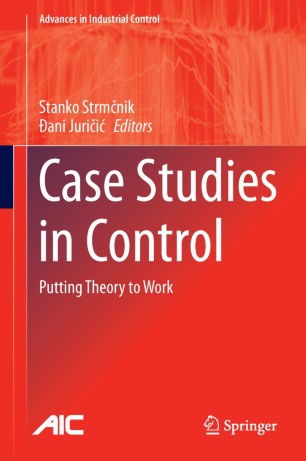 Case Studies in Control presents a framework to facilitate the use of advanced control concepts in real systems based on two decades of research and over 150 successful applications for industrial end-users from various backgrounds. In successive parts the text approaches the problem of putting the theory to work from both ends, theoretical and practical. The first part begins with a stress on solid control theory and the shaping of that theory to solve particular instances of practical problems. It emphasizes the need to establish by experiment whether a model-derived solution will perform properly in reality. The second part focuses on real industrial applications based on the needs and requirements of end-users. Here, the engineering approach is dominant but with theoretical input of varying degree depending on the particular process involved.

Following the illustrations of the progress that can be made from either extreme of the well-known theory–practice divide, the text proceeds to a third part related to the development of tools that enable simpler use of advanced methods, a need only partially met by available commercial products.

Each case study represents a self-contained unit that shows an experimental application of a particular method, a practical solution to an industrial problem or a toolkit that makes control design and implementation easier or more efficient. Among the applications presented are:

Written by contributors with a considerable record of industrially-applied research, Case Studies in Control will encourage interaction between industrial practitioners and academic researchers and be of benefit to both, helping to make theory realistic and practical implementation more thorough and efficacious.

Stanko Strmčnik joined the Jožef Stefan Institute, the leading Slovenian research institute in the field of natural sciences and engineering, in 1973. Since 1986 he has been head of the Department of Computer Automation and Control (later renamed the Department of Systems and Control) at the same institute. He is also a professor at the Faculty of Electrical Engineering, University of Ljubljana and at the School of Engineering and Management, University of Nova Gorica. During his career he has been involved in numerous research-and-development projects as well as various industrial applications. His research interests involve mathematical modelling, identification, optimal control, predictive control, PID tuning, process control, non-technical aspects of automation and technology transfer. He initiated and led the development of various tools and building blocks for control system implementation, e.g., SIMER – a microcomputer-based data-acquisition and control system, ANA – a universal computer-aided control systems design tool, MMC-90 – a microprocessor multi-loop controller, and ASPECT – a PLC-based system for advanced control. He was also deeply involved in some large industrial engineering projects, among them combustion control in boilers and industrial furnaces, the computer control of pulp cooking, and the computer control of titanium dioxide production.
Đani Juričić is a research fellow at the Jožef Stefan Institute and a professor of electrical engineering at the University of Nova Gorica. For almost 30 years he has been active in applied research in automatic control through numerous research grants and projects for industry, in the majority of which he acted as project leader. His research interests include condition monitoring, fault detection, isolation and prediction, the mathematical modelling of dynamical processes, signal processing, system identification, PID and optimal controller design. He has contributed to the CACSD tool ANA, algorithms for the control design of systems with backlash, the control of Wiener systems,  PID tuning,  modelling for the purpose of control, validation of data-driven models, algorithms for robust control and fault detection, and novel fault-localisation approaches based on approximate reasoning. His notable industrial accomplishments include algorithms for the on-line, model-based control of a pulp cooking process, condition monitoring systems for several processes in the chemical and process industries, a prototype of a system for fault detection and isolation in the production of electrical motors and a system for the on-line supervision of rotational machines and drives.