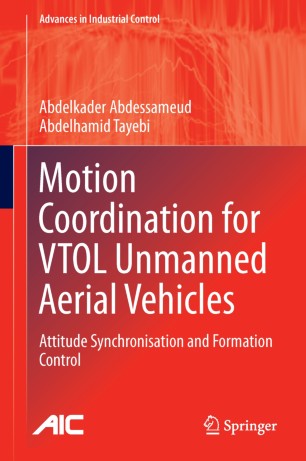 Motion Coordination for VTOL Unmanned Aerial Vehicles develops new control design techniques for the distributed coordination of a team of autonomous unmanned aerial vehicles. In particular, it provides new control design approaches for the attitude synchronization of a formation of rigid body systems. In addition, by integrating new control design techniques with some concepts from nonlinear control theory and multi-agent systems, it presents  a new theoretical framework for the formation control of a class of under-actuated aerial vehicles capable of vertical take-off and landing. Several practical problems related to the systems’ inputs, states measurements, and  restrictions on the interconnection  topology  between the aerial vehicles in the team  are addressed. Worked examples with sufficient details and simulation results are provided to illustrate the applicability and effectiveness of the theoretical results discussed in the book.

The material presented is primarily intended for researchers and industrial engineers from robotics, control engineering  and aerospace communities. It also serves as  a complementary reading for graduate students involved in research related to flying robotics, aerospace, control of under-actuated systems, and nonlinear control theory.

Abdelkader Abdessameud received his degree in Electrical Engineering from Institut National d'Electricité et d'Electronique, INELEC, Algeria, in 1995, his M.Sc. in robotics from Ecole Militaire Polytechnique de Bordj-El-Bahri, Algeria, in 1999, and his PhD in Electrical Engineering from The University of Western Ontario in November 2010. He is currently a post-doctoral research associate in the Department of Electrical and Computer Engineering at the UWO. From 2001 to 2007, he served as a Lecturer and Research Assistant in the département d'Automatisation des procédés industriels at the University of Boumerdes, Algeria. The current research interests of Dr. A.  Abdessameud are mainly related to nonlinear control theory with applications to the control of autonomous aerial vehicles, attitude control and synchronization, cooperative control of multi-vehicle systems.
Abdelhamid Tayebi received his B.Sc. in Electrical Engineering from Ecole Nationale Polytechnique d'Alger, Algeria in 1992, his M.Sc. in robotics from Université Pierre & Marie Curie, Paris, France in 1993, and his Ph.D. in Robotics and Automatic Control from Université de Picardie Jules Verne, France in December 1997. He joined the Department of Electrical Engineering at Lakehead University in December 1999 where he is presently a Professor. He is a Senior Member of IEEE and serves as an Associate Editor for IEEE Transactions on Systems, Man, and Cybernetics - Part B; Control Engineering Practice and IEEE CSS Conference Editorial Board. He is the founder and Director of the Automatic Control Laboratory at Lakehead University. His research interests are mainly related to linear and nonlinear control theory including adaptive control, robust control and iterative learning control, with applications to robot manipulators and aerial vehicles.