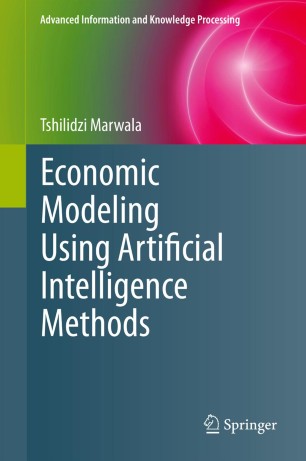 The artificial intelligence techniques used to model economic data include:

Signal processing techniques are explored to analyze economic data, and these techniques are the time domain methods, time-frequency domain methods and fractals dimension approaches. Interesting economic problems such as causality versus correlation, simulating the stock market, modeling and controling inflation, option pricing, modeling economic growth as well as portfolio optimization are examined. The relationship between economic dependency and interstate conflict is explored, and knowledge on how economics is useful to foster peace – and vice versa – is investigated. Economic Modeling Using Artificial Intelligence Methods deals with the issue of causality in the non-linear domain and applies the automatic relevance determination, the evidence framework, Bayesian approach and Granger causality to understand causality and correlation.

Economic Modeling Using Artificial Intelligence Methods makes an important contribution to the area of econometrics, and is a valuable source of reference for graduate students, researchers and financial practitioners.

Tshilidzi Marwala, born in Venda (Limpopo, South Africa), is the Dean of Engineering at the University of Johannesburg. He is a senior member of the IEEE and distinguished member of the ACM. He is the youngest recipient of the Order of Mapungubwe and was awarded the President Award by the National Research Foundation. His research interests include the applications of computational intelligence to engineering, computer science, finance, social science and medicine.

“The book explores the application of artificial intelligence methods to economic data modelling. … the book is well addressed to graduate students as well as researchers and practitioners in the field of finance and economics.” (Vangelis Grigoroudis, zbMATH, Vol. 1269, 2013)
Buy options