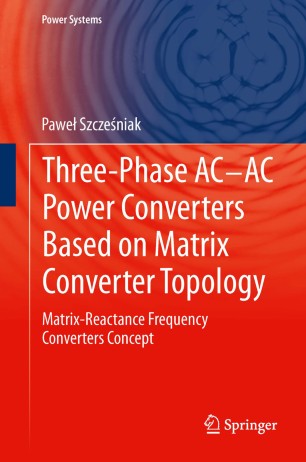 AC voltage frequency changes is one of the most important functions of solid state power converters. The most desirable features in frequency converters are the ability to generate load voltages with arbitrary amplitude and frequency, sinusoidal currents and voltages waveforms; the possibility of providing unity power factor for any load; and, finally, a simple and compact power circuit. Over the past decades, a number of different frequency converter topologies have appeared in the literature, but only the converters with either a voltage or current DC link are commonly used in industrial applications. Improvements in power semiconductor switches over recent years have resulted in the development of many structures of AC-AC converters without DC electric energy storage. Such converters are an alternative solution for frequently recommended systems with DC energy storage and are characterized by a lower price, smaller size and longer lifetime. Most of the these topologies are based on the structure of the matrix converter.

Paweł Szcześniak’s research is focused on Power Electronics Converters and their digital control. His experience in the field of power electronic converters is related to design, construction and testing of prototypes of matrix converters and matrix-reactance frequency converters, and has extensive experience in the field of digital control using a digital signal processor (DSP), which was used in the control systems in the designed power converters. In June 2010, Paweł Szcześniak obtained his Ph.D. degree from the Electrical Engineering Department at the University of Zielona Góra, defending a thesis dealing with power electronic converters, entitled: “Analysis and testing matrix-reactance frequency converters” and is now employed as an assistant professor at the Institute of Electrical Engineering at the University of Zielona Góra.