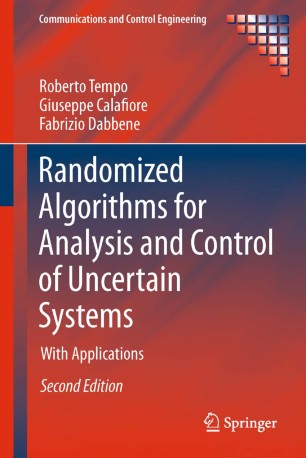 Randomized Algorithms for Analysis and Control of Uncertain Systems

The presence of uncertainty in a system description has always been a critical issue in control. The main objective of Randomized Algorithms for Analysis and Control of Uncertain Systems, with Applications (Second Edition) is to introduce the reader to the fundamentals of probabilistic methods in the analysis and design of systems subject to deterministic and stochastic uncertainty. The approach propounded by this text guarantees a reduction in the computational complexity of classical  control algorithms and in the conservativeness of standard robust control techniques. The second edition has been thoroughly updated to reflect recent research and new applications with chapters on statistical learning theory, sequential methods for control and the scenario approach being completely rewritten.

·         self-contained treatment explaining Monte Carlo and Las Vegas randomized algorithms from their genesis in the principles of probability theory to their use for system analysis;

·         development of a novel paradigm for (convex and nonconvex) controller synthesis in the presence of uncertainty and in the context of randomized algorithms;

·         comprehensive treatment of multivariate sample generation techniques, including consideration of the difficulties involved in obtaining identically and independently distributed samples;

·         applications of randomized algorithms in various endeavours, such as PageRank computation for the Google Web search engine,  unmanned aerial vehicle design (both new in the second edition), congestion control of high-speed communications networks and stability of quantized sampled-data systems.

The present book is a very timely contribution to the literature. I have no hesitation in asserting that it will remain a widely cited reference work for many years.

Roberto Tempo has been Director of Research of Systems and Computer Engineering since 1991. His main research activities are focused on complex systems with uncertainty, and related applications. On these topics he has given several invited lectures at various conferences and workshops, including the recent plenary lectures at The Society of Instrument and Control Engineers of Japan Annual Conference, Taipei, Taiwan, and the 29th Chinese Control Conference, Beijing, China, both held during summer 2010 and focused on randomized algorithms and their applications to computing the PageRank for the Google search engine. In 2009 he taught a formal course at the University of Illinois at Urbana-Champaign on the topic of randomized algorithms for systems and control. In Spring 2011 he will teach a similar course on Probabilistic Methods for Robustness at the graduate school in systems, control, optimization and networks at Université Catholique de Louvain, Belgium. In 2011 he will deliver other plenary lectures at the VALUETOOLS conference in Paris, and at the 23rd Chinese Control and Decision Conference in Mianyang, China.

Dr. Tempo is author or co-author of more than 170 research papers published in international journals, books and conferences. He is also a co-author of the book "Randomized Algorithms for Analysis and Control of Uncertain Systems," Springer, London, 2005. He is a recipient of the "Outstanding Paper Prize Award" from the International Federation of Automatic Control (IFAC) for a paper published in Automatica, and of the "Distinguished Member Award" from the IEEE Control Systems Society. He is a Fellow of the IEEE for "Contributions to Robust Identification and Control of Uncertain Systems" and a Fellow of the IFAC for "Contributions to the Analysis and Control of Uncertain Systems, for Pioneering the Probabilistic Approach to Robustness." In 2010 he served as President of the IEEE Control Systems Society.

Giuseppe Calafiore received the "Laurea" degree in Electrical Engineering from Politecnico di Torino in 1993, and the Ph.D. in Information and System Theory from Politecnico di Torino in 1997. He currently serves as Associate Professor at the "Dipartimento di Automatica e Informatica,'' Politecnico di Torino, Italy. Dr. Calafiore held visiting positions at Information Systems Laboratory, Stanford University, in 1995, at Ecole Nationale Supérieure de Techniques Avenceés (ENSTA), Paris, in 1998, and at the University of California at Berkeley, in 1999, 2003 and 2007. He is presently a visiting Senior Fellow at the Institute of Pure and Applied Mathematics, UCLA. Dr. Calafiore is Associate Editor for the IEEE Transactions on Automation Science and Engineering, for the IEEE Transactions on Systems, Man, and Cybernetics, and for the Journal Européen des Systèmes Automatisés. His research interests are in the field of analysis and control of uncertain systems, convex optimization, probabilistic algorithms and risk management. He he is the recipient of the 2008 IEEE CSS Axelby Award. He is coauthor of 6 books and over 120 publications on international journals and conference proceedings.

Fabrizio Dabbene received the Laurea degree in Electrical Engineering in 1995 and the Ph.D. degree in Systems and Computer Engineering in 1999, both fromPolitecnico di Torino, Italy. He is currently holding a tenured research position at the institute IEIIT of the National Research Council (CNR) of Italy. He has held visiting and research positions at the Department of Electrical Engineering,University of Iowa and at the RAS Institute of Control Science, Moscow. Dr. Dabbene also holds strict collaboration with Politecnico di Torino, where he teaches several courses in Systems and Control, and with Università degli Studi di Torino, where he does research on modeling of environmental systems. His research interests include robust control and identification of uncertain systems, randomized algorithms for systems and control, convex optimization and modeling of environmental systems. On these topics he has been the organizer or co-organizer of several invited sessions and special courses, and of two Conference Workshops (CDC-00 and MSC-08).

He is author or co-author of more than 80 publications, which include more than 25 articles published in international journals. He is author of the monograph "Randomized Algorithms for Analysis and Control of Uncertain Systems" and editor of the book "Probabilistic and Randomized Methods for Design under Uncertainty," both published by Springer. He is one of the main developers of the recently released Matlab Toolbox RACT (Randomized Algorithms Control Toolbox). Dr. Dabbene is Senior Member of the IEEE. He serves as Associate Editor for the IFAC Journal Automatica, Elsevier Science and for the IEEE Transactions on Automatic Control. From 2002 to 2008 he was a member of the Conference Editorial Board of the IEEE Control System Society. He is currently chairing IEEE Technical Committee on Computational Aspects of Control System Design(CACSD). He has been a member of the Program Committee for the joint conference CDC/ECC-05, for MSC 2008 and for CDC 2009, and he has served as member of several CDC and IFAC Award Committees. He was Program Chair of the CACSD Symposium for MSC 2010. He has been awarded the "Outstanding Paper Award 2010" by EurAgeng.

“I found this book to be both, an excellent introduction to randomized methods for people unfamiliar with the topic, and a very good refresher for those already familiar with the subject but who have not closely followed its latest development. … the book is suitable for both self-learning or an advanced, graduate level, seminar style course.” (Mario Sznaier, Automatica, Vol. 50 (7), July, 2014)

“This book is a significantly updated edition of the 2005 monograph of the same title. … Of particular interest will be the discussion of new applications, including unmanned aerial vehicles, systems biology, and Google PageRank and other Web ranking systems. This book should appeal to readers of the first edition and to graduate students, researchers, and practitioners looking for a self-contained introduction to an active research field.” (IEEE Control Systems Magazine, October, 2013)