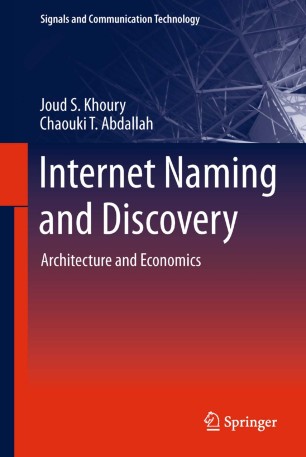 Naming is an integral building block within data networks and systems and is becoming ever more important as complex data-centric usage models emerge. Internet Naming and Discovery is timely in developing a unified model for studying the topic of naming and discovery. It details the architectural and economic tools needed for designing naming and discovery schemes within the broader context of internetwork architecture.

Readers will find in this book a historic overview of the Internet and a comprehensive survey of the literature, followed by and an in-depth examination of naming and discovery. Specific topics covered include:

·         a discussion of the properties of names and bindings, along with illustrative case studies;

·         taxonomy that helps in organizing the solution space, and more importantly in identifying new avenues for contributing to the field;

·         a general model for exploring the tradeoffs involved in designing discovery systems;

·         broad treatment of the main economic issues that arise in the context of discovery; and

·         a game-theoretic incentive model for route distribution (and discovery) in the context of path-vector routing protocols (mainly BGP).

Internet Naming and Discovery will be of great value to readers, including graduate students, engineers and computer scientists, theoreticians and practitioners, seeking a training in advanced networking, or specializing in computer and communications networks.

Chaouki T. Abdallah started his college education at the Ecole Supérieure d'Ingénieurs de Beyrouth - Université Saint-Joseph in Beirut, Lebanon, but finished his undergraduate studies at Youngstown State University, with a Bachelors of Engineering degree in Electrical Engineering in 1981. He then obtained his MS and Ph.D. in Electrical Engineering from GA Tech in 1982, and 1988 respectively. He joined the Electrical and Computer Engineering department at the University of New Mexico where he is currently professor and chair. Professor Abdallah conducts research and teaches courses in the general area of systems theory with focus on control and communications systems. His research has been funded by national funding agencies, national laboratories, and by various companies. He has also been active in designing and implementing various international graduate programs with Latin American and European countries. He was a co-founder in 1990 of the ISTEC consortium, which currently includes more than 150 universities in the US, Spain, and Latin America. He has published 7 books, and more than 300 peer-reviewed papers. His PhD students hold academic positions in the USA and in Europe, and senior technical positions in various US National Laboratories. Professor Abdallah is a senior member of IEEE and a recipient of the IEEE Millennium medal. He is also active in the IEEE Control Systems Society most recently serving as the general chair of the 2008 Conference of Decision and Control CDC 2008.

“This book examines a foundational concept of the Internet: its naming and addressing architecture. … The book covers the fundamental and thus dry topic of Internet naming and discovery protocols, and as such would mostly be useful in an academic or research setting. … The persistent reader will be rewarded with a thorough overview of the research in this field, including the authors’ own models.” (Riemer Brouwer, ACM Computing Reviews, March, 2013)