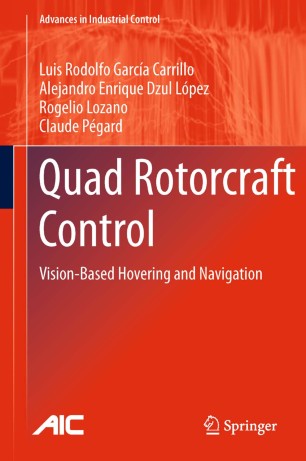 Quad-Rotor Control develops original control methods for the navigation and hovering flight of an autonomous mini-quad-rotor robotic helicopter. These methods use an imaging system and a combination of inertial and altitude sensors to localize and guide the movement of the unmanned aerial vehicle relative to its immediate environment.

The history, classification and applications of UAVs are introduced, followed by a description of modelling techniques for quad-rotors and the experimental platform itself. A control strategy for the improvement of attitude stabilization in quad-rotors is then proposed and tested in real-time experiments. The strategy, based on the use of low-cost components and with experimentally-established robustness, avoids drift in the UAV’s angular position by the addition of an internal control loop to each electronic speed controller ensuring that, during hovering flight, all four motors turn at almost the same speed. The quad-rotor’s Euler angles being very close to the origin, other sensors like GPS or image-sensing equipment can be incorporated to perform autonomous positioning or trajectory-tracking tasks.

Two vision-based strategies, each designed to deal with a specific kind of mission, are introduced and separately tested. The first stabilizes the quad-rotor over a landing pad on the ground; it extracts the 3-dimensional position using homography estimation and derives translational velocity by optical flow calculation. The second combines colour-extraction and line-detection algorithms to control the quad-rotor’s 3-dimensional position and achieves forward velocity regulation during a road-following task.

In order to estimate the translational-dynamical characteristics of the quad-rotor (relative position and translational velocity) as they evolve within a building or other unstructured, GPS-deprived environment, imaging, inertial and altitude sensors are combined in a state observer.

The text gives the reader a current view of the problems encountered in UAV control, specifically those relating to quad-rotor flying machines and it will interest researchers and graduate students working in that field. The vision-based control strategies presented help the reader to a better understanding of how an imaging system can be used to obtain the information required for performance of the hovering and navigation tasks ubiquitous in rotored UAV operation.