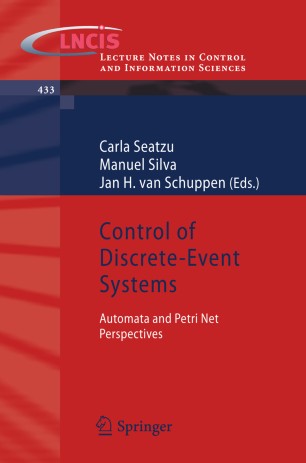 Control of Discrete-event Systems provides a survey of the most important topics in the discrete-event systems theory with particular focus on finite-state automata, Petri nets and max-plus algebra. Coverage ranges from introductory material on the basic notions and definitions of discrete-event systems to more recent results. Special attention is given to results on supervisory control, state estimation and fault diagnosis of both centralized and distributed/decentralized systems developed in the framework of the Distributed Supervisory Control of Large Plants (DISC) project. Later parts of the text are devoted to the study of congested systems though fluidization, an over approximation allowing a much more efficient study of observation and control problems of timed Petri nets. Finally, the max-plus algebraic approach to the analysis and control of choice-free systems is also considered. Control of Discrete-event Systems provides an introduction to discrete-event systems for readers that are not familiar with this class of systems, but also provides an introduction to research problems and open issues of current interest to readers already familiar with them. Most of the material in this book has been presented during a Ph.D. school held in Cagliari, Italy, in June 2011.

Carla Seatzu is an Assistant Professor of Automatic Control at the Department of Electrical and Electronic Engineering of the University of Cagliari, Italy. She received the Laurea degree in electrical engineering from the University of Cagliari, Italy in 1996, and the Ph.D. degree in electronic engineering and computer science from the same university in 2000. In April 2011 she obtained the national habilitation as Associate Professor. Her research interests include discrete-event systems, hybrid systems, Petri nets, networked control systems, control of mechanical systems. She has published more than 140 papers and one textbook on these topics. She was Chair of the National Organizing Committee of ADHS'06 (2nd IFAC Conf. on the Analysis and Design of Hybrid Systems) and member of the International Program Committee of around 40 international conferences. She is associate editor of the international journal Nonlinear Analysis: Hybrid Systems and Applications (Elsevier) and associate editor of the Conference Editorial Board of the IEEE Control System Society; she is co-chair of the IEEE IES Technical Committee on Factory Automation - Subcommittee on Industrial Automated Systems and Controls.
Manuel Silva Suárez is full Professor of System Engineering and Automatic Control in the Computer Science and System Engineering Department of the University of Zaragoza. He has been active in the area of discrete-event systems since the late 1970s, being (co)author of several books. He has published more than two hundred papers on modelling, analysis (verification and performance evaluation), synthesis (different kinds of control approaches) and implementation (eventually fault-tolerant) of Petri nets as well as a few on process algebras and their relation to net models and analysis techniques. Recently, he has been particularly interested in the fluidification of Discrete Event Systems. He has participated actively in the organization of more than one hundred international conferences related to automatic control, computer science and operations research, several of these (related to IEEE, IFAC, EATCS…) in Zaragoza. He has organized special tutorials days on discrete event systems modelling, analysis and control for many international conferences. He has been a member of the steering committees of conferences like: International Conference on Petri Nets and Other Concurrency Models; International Workshop on Discrete Event Systems (retiring as chairman in September 2010); IFAC International Conference on Analysis and Design of Hybrid Systems, he is/has been involved in editing journals in Europe (e.g., The European Journal of Control), USA (e.g., IEEE Transactions on Robotics and Automation and Discrete Event Systems), and Japan (IEICE Transactions On Fundamentals of Electronics, Communications and Computer Sciences).
Jan van Schuppen  has been active in the area of control of discrete-event systems since the early 1980s. He has published many papers on control of distributed/decentralized discrete-event systems. He has twice presented a special topics course on control of discrete-event systems. Otherwise his research interests include system theory and systems identification, control of stochastic systems, control of  distributed/decentralized systems, for many classes of deterministic and stochastic systems. He is affiliated with the research institute CWI in Amsterdam, The Netherlands and with the Department of Mathematics of  the Delft University of Technology. He is currently Co-Editor of the journal Mathematics and Control, Signals, and Systems, was a Department Editor of the journal Discrete Event Dynamic Systems, and was an editor at large of the IEEE Transactions on Automatic Control.