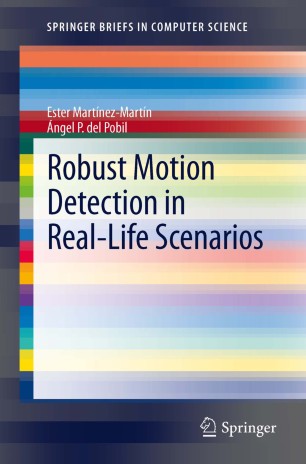 Our knowledge of the surrounding world is obtained by our senses, of which vision is the most important for the information it can provide. In artificial systems, the field of Computer Vision aims to identify physical objects and scenes from captured images, to make useful decisions. This involves the processing and analysis of images, video data, and multi-dimensional data like medical scans.

In this context, motion provides a stimulus for detecting objects in movement within the observed scene. Moreover, motion allows other characteristics to be obtained, such as object shape, speed or trajectory, which are meaningful for detection and recognition. However, the motion observable in a visual input can be due to different factors: movement of the imaged objects, movement of the observer, motion of the light sources, or a combination of these.

This work focuses on motion detection from images captured by perspective and fisheye still cameras, proposing a complete sensor-independent visual system that provides robust target motion detection. First, the way sensors obtain images is studied, allowing a spatial analysis of motion to be carried out. Then, a novel background maintenance approach for robust target motion detection is implemented. Two different situations are considered: a fixed camera observing a constant background where objects are moving; and a still camera observing objects in movement against a dynamic background. This permits the development of a surveillance mechanism that removes the constraint of observing a scene free of foreground elements to obtain a reliable background model, since this situation cannot be guaranteed when operating in an unknown environment. Other problems are also addressed for the successful handling of changes in illumination, the distinction between foreground and background elements, and non-uniform vacillating backgrounds.