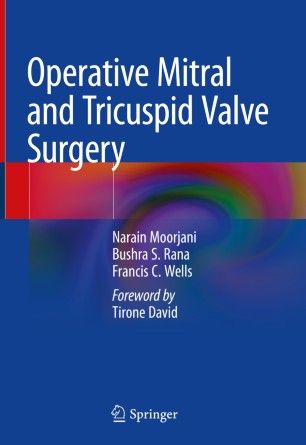 This book reviews the surgical management of the mitral and tricuspid valves. It provides a detailed examination of the recent exponential improvements in the understanding of the pathophysiology of the disease processes affecting these valves, which has resulted in significant changes in the strategies that can be applied. Chapters include analysis of the basic sciences related to the anatomy and physiology of the mitral and tricuspid valves, pre-operative imaging of these valves, illustrating the variety of pathologies encountered, and critically a comprehensive step-by-step approach to the peri-operative management and surgical techniques pertaining to each pathological process.

Operative Mitral and Tricuspid Valve Surgery systematically covers all major topics involved in the current practice of an adult cardiac surgeon who performs operations on the mitral and tricuspid valves. It is therefore suitable for the cardiac intensive care unit specialist interested in improving their knowledge of cardiac patient management.  It is an essential resource for all adult cardiac surgeons and cardiac intervention specialists at any stage of their career.

Narain Moorjani is a cardiothoracic surgeon providing the full range of cardiac surgical procedures, including coronary artery bypass grafting and aortic valve replacement.  He forms part of the specialist valve group, performing complex mitral valve repair surgery, as well as surgery of the thoracic aorta. He also performs procedures to control abnormal heart rhythms, as well as minimally invasive cardiac surgery (including valve surgery through small incisions and coronary surgery without the use of the heart-lung bypass machine). He was the first surgeon to introduce minimally invasive cardiopulmonary bypass to Papworth Hospital.

Narain Moorjani came to Papworth having previously worked as a consultant cardiac surgeon at the Royal Brompton Hospital, London and Assistant Professor in Cardiothoracic Surgery in Philadelphia, USA. Prior to that, he completed a research doctorate of medicine (MD) at the University of Oxford and National Heart and Lung Institute, investigating the genes involved in the development of heart failure. His research interests are currently focussing on the genes responsible for enlargement of the thoracic aorta.

Dr. Bushra S. Rana  was appointed as a consultant cardiologist and clinical lead in diagnostic and interventional echocardiography and cardiac testing (non-invasive) at Papworth Hospital in 2009. She is currently the Co-Lead in specialist valve and structural heart disease service and co-chair in the trans-aortic valve implantation (TAVI) programme at Papworth Hospital. She is also an active member of the British Society of Echocardiography (BSE) and a committee member since 2005 and the Chair of Education Committee since 2013. Dr Rana has also developed national training programmes such as the BSE Advanced Imaging Conference, that is held yearly at the Royal society of Medicine, London.

Francis C. Wells is a recognized leader in the field of mitral and tricuspid valve surgery.  He lectures on the subject internationally and has published numerous articles on the topic. He initially trained in London and the United States, before moving to Papworth Hospital as a consultant cardiothoracic surgeon in 1986. His specialist area of cardiac surgical interest is the management of all forms of heart valve disease, especially mitral valve reconstruction.

Mr Wells has the largest experience in the United Kingdom and among the largest in the world with over 3,000 cases completed achieving a near 100% repair rate for leaking mitral valves with mortality at less than 1.0% for first time procedures. His aim is to achieve a normally functioning valve. He also has an interest in aortic valve repair and surgery of the aorta. In his thoracic practice, Mr Wells offers a full range of surgical procedures for lung cancer and all benign diseases in the chest. This includes hyperhydrosis, thoracic outlet syndrome and pectus deformities.