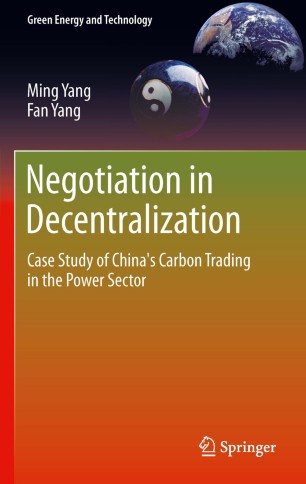 Case Study of China's Carbon Trading in the Power Sector

The Chinese government set a target to reduce China’s carbon intensity by 40%-45% in 2020 at its 2005 level. To achieve this target, the government has allocated targets to provinces, cities, and large enterprises, and selected five pilot provinces and eight cities for CO2 emission trading. Such emission trading process will involve decentralization, optimization, and negotiation. The prime objective of this book is to perform academic research on simulating the negotiation process. Through this research, a methodological framework and its implementation are set up to analyze, model and facilitate the process of negotiation among central government and individual energy producers under environmental, economical and social constraints.

Negotiation in Decentralization: Case Study of China's Carbon Trading in the Power Sector discusses research carried out on negotiation issues in China regarding Chinese power sector reform over the past 30 years. Results show that conflicts exist between power groups and the national government, and that the most current negotiation topics in China's power industry are demand and supply management, capital investment, energy prices, and CO2 emission mitigations.

Negotiation in Decentralization: Case Study of China's Carbon Trading in the Power Sector is written for government policy makers, energy and environment industry investors, energy program/project managers, environment conservation specialists, university professors, researchers, and graduate students. It aims to provide a methodology and a tool that can resolve difficult negotiation issues and change a loss-loss situation to a win-win situation for key players in a decentralized system, including government policymakers, energy producers, and environment conservationists.

Dr. Ming Yang is Senior Environmental Economist at an international organization based in Washington, D.C.  Prior to joining the organization, he worked for four years as Energy and Environment Economist and Energy Technology Economist for the International Energy Agency of the OECD in Paris. Before that, he was Energy Adviser and Climate Change Specialist for two years at the Asian Development Bank. Dr Yang is good at quantitative analysis in issues related to economics, engineering, technology and climate change. In 1986, he undertook a feasibility study with MARKAL model on China’s Three Gorges Power Plant. In 1994, he simulated negotiation process by using EFOM model. In 2007, with the IEA’s ETP model (the new version of MARKAL) he designed two scenarios for IEA’s Energy Technology Perspectives 2008. Over the past two decades, he has about 100 articles published in journals and conference proceedings. He significantly contributed to quantitative analysis and writing of four books on energy and climate change that were published in the Asian Development Bank and the International Energy Agency. Ming holds a Ph.D. in energy economics and planning from the Asian Institute of Technology in Bangkok jointly with l'Institut d'Economie et de Politique de l'Energie (IEPE), Université des Sciences Sociales, Grenoble, France.

Mr. Fan Yang has two years of work experience in economics and environment in an international organization and couple of universities, including the United Nations Environment Program in Washington, D.C., the University of Melbourne in Australia, and Monash University in Australia. Fan is talented with economic and statistics analyses. He has three papers published in top international journals. Currently, he is studying for an advanced degree in statistics science at Gorge Mason University in the USA.