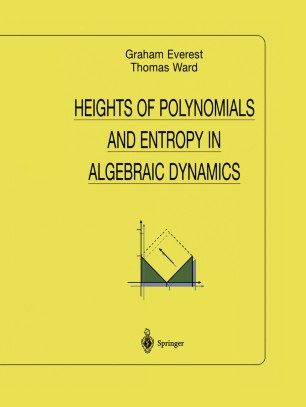 Heights of Polynomials and Entropy in Algebraic Dynamics

Arithmetic geometry and algebraic dynamical systems are flourishing areas of mathematics. Both subjects have highly technical aspects, yet both of­ fer a rich supply of down-to-earth examples. Both have much to gain from each other in techniques and, more importantly, as a means for posing (and sometimes solving) outstanding problems. It is unlikely that new graduate students will have the time or the energy to master both. This book is in­ tended as a starting point for either topic, but is in content no more than an invitation. We hope to show that a rich common vein of ideas permeates both areas, and hope that further exploration of this commonality will result. Central to both topics is a notion of complexity. In arithmetic geome­ try 'height' measures arithmetical complexity of points on varieties, while in dynamical systems 'entropy' measures the orbit complexity of maps. The con­ nections between these two notions in explicit examples lie at the heart of the book. The fundamental objects which appear in both settings are polynomi­ als, so we are concerned principally with heights of polynomials. By working with polynomials rather than algebraic numbers we avoid local heights and p-adic valuations.