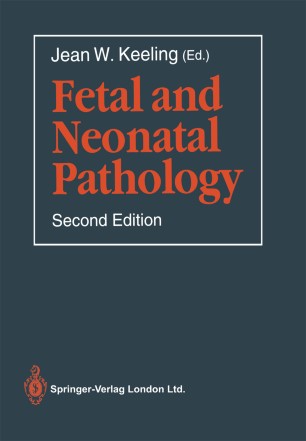 A classic in the field! The first edition of this highly readable and practical text quickly established a reputation as the best single source of information on common pathological findings in the perinatal setting. Morbid anatomists and histopathologists the world over turn to Dr. Keeling's book to help them find appropriate methods of investigation for discovering fetal abnormality in the second and third trimester and in neonatal death. Expanded and up-to-date! The second edition has been considerably expanded and revised to reflect recent modifications in clinical practice, yet it still provides complete and unique coverage in only one volume. Clearly organized to give both clinical background and system-by-system coverage! Following the format of the first edition, the first half of the book discusses problems encountered in fetal/perinatal pathology with some essential clinical background; the second half illustrates pathological conditions system by system. The differences between second and third trimester conditions are explicitly shown. Cross-referenced for easy access! Related conditions and pathological details are cross-referenced between the sections by chapter and page number so that complete access to all the information is guaranteed. From the many excellent reviews of the first edition:"Not the least of its winning points is its readability throughout. I strongly recommend this book to anyone who has anything at all to do with fetuses and neonates professionally." #Pathology#1 "The book contains an enormous quantity of information on aspects of the subject not available elsewhere and well-chosen, up-to-date references throughout. It should certainly be available for reference in all departments concerned with perinatal medicine..." #The Lancet#2 "It succeeds splendidly in providing the general histopathologist with a clear outline of perinatal pathology, and destroys any residual reasons for regarding this branch of pathology as being on the one hand, uninformative or, on the other hand, enveloped in a mystique of its own. ... It should be in the hands of, or at least available to, all general pathologists called upon to perform perinatal autopsies; many non-pathologists concerned with fetal development and disorders will also find this text of considerable interest." #Placenta#3 "If one were allowed a single reference book on fetal and neonatal pathology this would be the one to have!" #Pathology#4