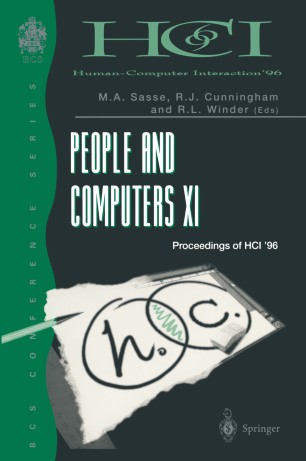 Disciplines, including Human-Computer Interaction (HCI), consist of knowledge supporting practices which solve general problems (Long & Dowell, 1989). A disci­ pline thus requires knowledge to be acquired which can be applied by practitioners to solve problems within the scope of the discipline. In the case of HCI, such knowledge is being acquired through research and, less formally, through the description of successful system development practice. Some have argued that knowledge is further embodied in the artefacts. HCI knowledge is applied to solve user interface design problems. Such applica­ tion is facilitated if the knowledge is expressed in a conception which makes explicit the design problems of practitioners. A conception has been proposed by Dowell & Long (1989). The conception provides a framework within which to reason about the implications of designs for system performance. The framework is concordant with the trend towards design, discernible in recent HCI research. It is further compatible with notions of top-down design, fundamental to software engineering practice. 2 Teaching and the HeI Research and Development Gap 2.1 An Assessment of Current HCI Education Teaching is one means by which practitioners learn to specify discipline problems. It is also a means by which they acquire knowledge to enable the problems to be solved.