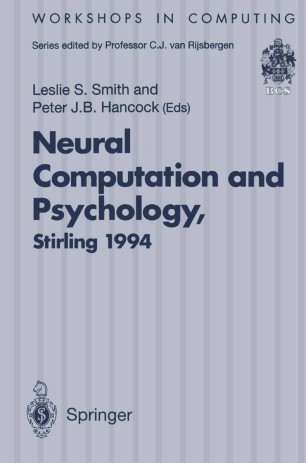 The papers that appear in this volume are refereed versions of presenta­ tions made at the third Neural Computation and Psychology Workshop, held at Stirling University, Scotland, from 31 August to 2 September 1994. The aim of this series of conferences has been to explore the interface between Neural Computing and Psychology: this has been a fruitful area for many researchers for a number of reasons. The development ofNeural Computation has supplied tools to researchers in Cognitive Neuroscience, allowing them to look at possible mechanisms for implementing theories which would otherwise remain 'black box' techniques. These theories may be high-level theories, concerned with interaction between a number of brain areas, or low-level, describing the way in which smaller local groups of neurons behave. Neural Computation techniques have allowed computer scientists to implement systems which are based on how real brains appear to function, providing effective pattern recognition systems. We can thus mount a two-pronged attack on perception. The papers here come from both the Cognitive Psychology viewpoint and from the Computer Science viewpoint: it is a mark of the growing maturity of the interface between the two subjects that they can under­ stand each other's papers, and the level of discussion at the workshop itself showed how important each camp considers the other to be. The papers here are divided into four sections, reflecting the primary areas of the material.