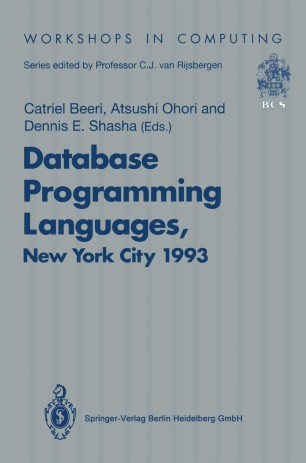 The Fourth International Workshop on Database Programming Languages - Object Models and Languages (DBPL-4) took place in Manhattan, New York City, 30 August-1 September 1993. The areas of interest and the format of DBPL-4 focused on the integration of programming languages, object models, type systems and database systems. As in the previous DBPL workshops, the setting was informal, allowing the participants to actively discuss and argue about the ideas presented in the talks. The comments and remarks made by the participants during and after the presentations were taken into account in the preparation of the final versions of the papers. The result, we believe, is a set of excellent papers. The DBPL sequence is closely related to the sequence of International Workshops on Persistent Object Systems (POS), first started in 1985. While the DBPL workshops focus on language and model issues, the POS workshops have focused on implementation issues; thus the two sequences complement each other. Many researchers participate in both workshop series. The eight sessions of the technical program of DBPL-4 were as follows: 1. Bulk types and their query languages (two sessions). 2. Object models and languages. 3. Data types with order. 4. Mechanisms to support persistence, reflection, and extensibility. 5. Query optimization and integrity constraints. 6. Logic-based models. 7. Implementation and performance issues.