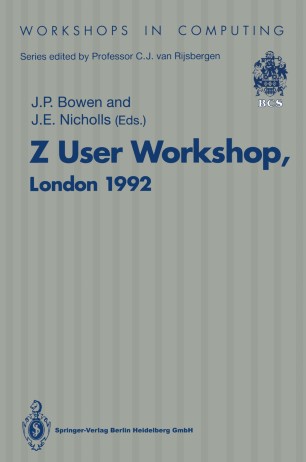 The Z notation has been developed at the Programming Research Group at the Oxford University Computing Laboratory and elsewhere for over a decade. It is now used by industry as part of the software (and hardware) development process in both Europe and the USA. It is currently undergoing BSI standardisation in the UK, and has been proposed for ISO standardisation internationally. In recent years researchers have begun to focus increasingly on the development of techniques and tools to encourage the wider application of Z and other formal methods and notations. This volume contains papers from the Seventh Annual Z User Meeting, held in London in December 1992. In contrast to previous years the meeting concentrated specifically on industrial applications of Z, and a high proportion of the participants came from an industrial background. The theme is well represented by the four invited papers. Three of these discuss ways in which formal methods are being introduced, and the fourth presents an international survey of industrial applications. It also provides a reminder of the improvements which are needed to make these methods an accepted part of software development. In addition the volume contains several submitted papers on the industrial use of Z, two of which discuss the key area of safety-critical applications. There are also a number of papers related to the recently-completed ZIP project. The papers cover all the main areas of the project including methods, tools, and the development of a Z Standard, the first publicly-available version of which was made available at the meeting. Finally the volume contains a select Z bibliography, and section on how to access information on Z through comp.specification.z, the international, computer-based USENET newsgroup. Z User Workshop, London 1992 provides an important overview of current research into industrial applications of Z, and will provide invaluable reading for researchers, postgraduate students and also potential industrial users of Z.