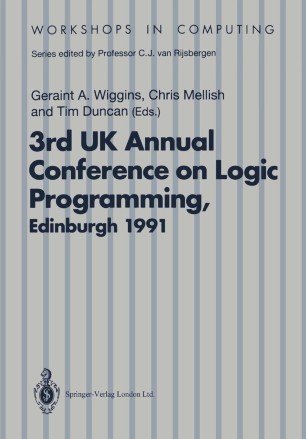 Since its conception nearly 20 years ago, Logic Programming - the idea of using logic as a programming language - has been developed to the point where it now plays an important role in areas such as database theory, artificial intelligence and software engineering. However, there are still many challenging research issues to be addressed and the UK branch of the Association for Logic Programming was set up to provide a forum where the flourishing research community could discuss important issues of Logic Programming which were often by-passed at the large international conferences. This volume contains the twelve papers which were presented at the ALPUK's 3rd conference which was held in Edinburgh, 10-12 April 1991. The aim of the conference was to give a broad but detailed technical insight into the work currently being done in this field, both in the UK and by researchers as far afield as Canada and Bulgaria. The breadth of interest in this area of Computer Science is reflected in the range of the papers which cover - amongst other areas - massively parallel implementation, constraint logic programming, circuit modelling, algebraic proof of program properties, deductive databases, specialised editors and standardisation. The resulting volume gives a good overview of the current progress being made in the field and will be of interest to researchers and students of any aspects of logic programming, parallel computing or database techniques and management.