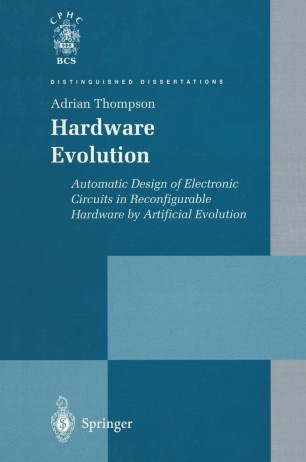 Evolution through natural selection has been going on for a very long time. Evolution through artificial selection has been practiced by humans for a large part of our history, in the breeding of plants and livestock. Artificial evolution, where we evolve an artifact through artificial selection, has been around since electronic computers became common: about 30 years. Right from the beginning, people have suggested using artificial evolution to design electronics automatically.l Only recently, though, have suitable re­ configurable silicon chips become available that make it easy for artificial evolution to work with a real, physical, electronic medium: before them, ex­ periments had to be done entirely in software simulations. Early research concentrated on the potential applications opened-up by the raw speed ad­ vantage of dedicated digital hardware over software simulation on a general­ purpose computer. This book is an attempt to show that there is more to it than that. In fact, a radically new viewpoint is possible, with fascinating consequences. This book was written as a doctoral thesis, submitted in September 1996. As such, it was a rather daring exercise in ruthless brevity. Believing that the contribution I had to make was essentially a simple one, I resisted being drawn into peripheral discussions. In the places where I deliberately drop a subject, this implies neither that it's not interesting, nor that it's not relevant: just that it's not a crucial part of the tale I want to tell here.